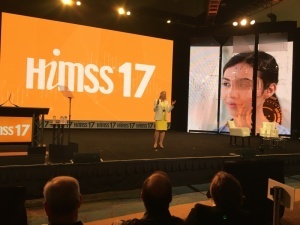 #HIMSS17
In a stirring keynote address to a capacity crowd of 6,000 at the 2017 HIMSS conference, IBM chairman, president and CEO Ginni Rometty said that the time is right to solve some of the world’s greatest problems.

Despite the political and social change that might have a serious impact on health care, she told the group there is reason to be optimistic.

“I feel so profoundly hopeful,” said Rometty. “I think we’re at a time to reinvent and transform health care to an era of personalized medicine.”

According to Rometty, cognitive use of big data to develop artificial intelligence has become mainstream, is here to stay, and amounts to a “moon shot.”

The pieces are in place for these technologies to take hold and have a larger influence on health care worldwide. Rometty noted, for example, that about 14 million new cases of cancer are diagnosed annually — and in the next few years that number is expected to grow to 20 million, many in developing nations.

“There is one oncologist for every 1,699 patients in India,” she said, citing the need for doctors to be able work faster and with better results, and also making a case for her company's own IBM’s Watson. “What used to take 20 minutes of patient information for a doctor to gather now takes 20 seconds with Watson.”

And, based on a recent study, Watson can find clinically actionable items in a medical record 30 percent more often than physicians alone. But even with this result, she stressed that it is not the role of AI such as Watson to replace doctors, but to serve as another diagnostic asset.

IBM made a slew of announcements to coincide with their CEO’s address, many related to Watson.