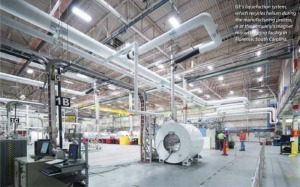 GE’s liquefaction system, which recycles
helium during the manufacturing process,
is at the company’s magnet manufacturing
facility in South Carolina
From the October 2016 issue of HealthCare Business News magazine

Just like the blimps and balloons it fills, the price of helium has been on the rise for the last several years. And despite the recent discovery of a vast deposit of the gas in Tanzania, MR manufacturers and independent service providers are not optimistic that costs will come down significantly, if at all.

At the same time, more facilities are swapping older MR scanners for systems with zero helium boil-off technology. After a global helium shortage and skyrocketing prices from 2011 to 2013, during which time a number of U.S. plants had production issues, those in the industry are cautiously optimistic that the helium supply can meet the growing demand, which comes not only from health care, but also from other industries, including semiconductor manufacturing.

“Things have pretty much been stagnant,” says Ron Schultz, field service manager for Cool Pair Plus. “The availability of helium is easier now. However, we’re seeing price increases continue. It doesn’t really seem like we’re going in the downward direction anytime soon.” Helium prices have been hovering in the mid-teens per liter, those in the industry say. Ken Sourounis, managing partner of CryoSRV, says his company pays about 30 percent more per liter than it did five years ago.

Randal Walker, vice president of CT and MR for BC Technical, says prices have increased 30 percent in the last two years, and that helium can cost up to $18 per liter in some cases. Helium supply no longer appears to be an issue, however. “We’re using less helium than we have in the past, so the supply is more stable,” Walker says. “We’re not having to skip fills.” Andrew Wade, helium commodity manager at Siemens Healthineers, says new helium sources came online in 2013 in Qatar, and new planned sources in Qatar and Russia could support the helium industry well into the next decade.

“More plants means there’s more balance in the supply chain,” Wade says. “We’re expecting a flattening or rebalancing of prices, though we are aware that new sources will require significant investments and higher logistical costs.”

Africa discovery
In June, researchers from Oxford and Durham universities in the U.K., working with Norwegian helium exploration company Helium One, announced the discovery of helium reserves in Tanzania’s East African Rift Valley. The discovery is considered unique, as helium is normally extracted from natural gas as part of the drilling process, and is generally not discovered intentionally, according to the researchers. They say the same strategy could be used to find helium in other parts of the world where there is volcanic activity.
1(current)
2
3