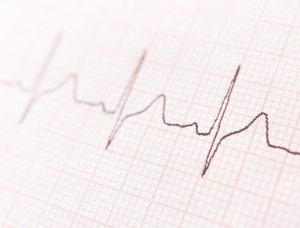 With nearly half of all sudden cardiac deaths occurring in people with no symptoms or at-risk history, results of a study at the Rollins School of Public Health at Emory University suggest that screening EKGs could save lives. The lead researcher said that the study aimed to improve predictive modeling to help doctors and patients better access future risk.

“Many heart disease deaths occur in community-based individuals who were not aware that they were at risk,” Dr. Amit Shah, MSCR, Assistant Professor of Epidemiology and Cardiology and staff cardiologist told HCB News. “I have been attracted to the ECG (also known as EKG) as a screening tool because of its low cost and risk; additionally, much of the information is very predictive of future events.”

The team he led reviewed 10,000 “community-based” adults 40-74 years old. They then developed a risk equation based on three metrics: heart rate, T-axis and QT interval. The next step was to compare this measurement to the well-known Framingham risk and AHA/ACC Pooled Cohort equations. Their predictive tool was able to improve risk classification of cardiovascular death by 25 percent compared to using the Framingham equation alone.

“The ECG helps to improve classification by relying on different criteria than the Framingham score,” Shah explained. “Some risk factors, like genetic abnormalities, may not influence the Framingham score, but instead may result in abnormalities in the ECG.” He added that using the EKG score as a complimentary risk strategy helped build upon the current standard of care and resulted in improved prediction capability.

He cited a 1998 study published in Circulation (American Heart Association) that found “sudden cardiac death is most common and often the first manifestation of coronary heart disease and is responsible for 50 percent of the mortality from cardiovascular disease in the United States and other developed counties.”

He also noted that for patients with risk factors such as diabetes, the EKG would reassure that they are not showing signs of heart disease. The caveat, he added, is that all patients should strive to live a healthy lifestyle to minimize such risk factors.

Shah also stressed that while their risk equation was derived in a national sample, more research is indicated to determine if the predictive modeling extends to other sample groups. A clinical trial would also determine if preventative actions – such as exercise or imaging tests for high-risk patients – can reduce the undiagnosed threat identified in the study.

How AI is driving the future of cardiac MR