Who was at IAMERS and what happened?

Who was at IAMERS and what happened? 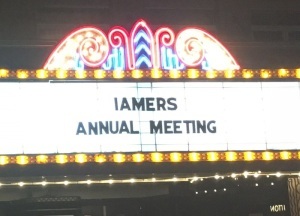 For more than 20 years, I have been attending the IAMERS Annual Meeting. I am always glad that I attend; I always walk away a little bit smarter and it gives me the chance to see a lot of different people. This year was no exception.

My wife has come to look forward to the event as well. It gets her away from work and she gets to hang out with the other spouses. There is always a new person and the other spouses always seem to be very welcoming to the new people.

This year, there were several hot topics; the FDA, the possibility that they are going to regulate in-house and independent service companies, and the importance of being ISO certified.

Casper Uldirks shared a lot of his insight with us. One particular interesting thing he talked about was that as people retire and new people take their place in the FDA, those new people need to become acquainted with the sorts of things that the retiring people knew and took for granted.

It is really a brilliant observation when you think about it; in the same way that you have to introduce your company to new customers, all of us, have to reintroduce the newest members of the FDA team to the challenges that the health care industry faces.

Juile Mardikian from Oxford led the discussion on ISO certification and Rob Kerwin, together with Jim Goldner, helped.

In the past, I did not think that becoming ISO certified applied to me but I believe it was Stuart Latimer who pointed out that ISO certification helps to make his company more efficient and more profitable. He suggested that it was a net plus.

Kevin McGhee and Joe Sciarra talked about their experience and how their first consultant did not seem to understand their business but their second consultant was very helpful. They seemed to indicate that once they started to work and found their groove, following up on the paperwork was not easy — but nor was it too difficult.

John Krieg from the Medical Dealer presented to the group and talked about ways that he was helping his clients to gain greater visibility in the marketplace.

Everybody in the room had the chance to stand up and introduce themselves and tell everyone else a little bit about their company. That seemed to go over pretty well.

Diana Upton, the President, was loved and applauded by all. She works really hard to make these events successful and she did a great job this time. She spoke to us and commented about how many ultrasound companies were present at the meeting.

Some of these included Conquest Imaging with Mark Conrad, who never rests; Josh Sutton from Focused Ultrasound; Michael Asmer and Mike Dilick from MedCorp; David Trogden at Probo Medical and Stuart Latimer from Trisonics.
1(current)
2
3
4