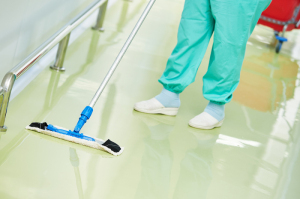 Hospitals now have a powerful new incentive to reduce central line-associated bloodstream infections (CLABSIs): On Jan. 1, 2015, CMS expanded reporting of these infections beyond the intensive care unit to all medical and surgical beds throughout the hospital. In August, Medicare announced plans to use this data as one of the measures to determine which hospitals will be penalized under its new Hospital-Acquired Condition (HAC), starting on Oct. 1, 2017. Expanded reporting is likely to have significant financial impact, considering that poorly performing hospitals incurred an estimated $330 million in penalties in FY 2015, the HAC program’s first year. CMS calculates each hospital’s HAC score, based on its rate of CLABSIs and other preventable complications, such as the accidental puncture and collapse of the patient’s lung during central line insertions (iatrogenic pneumothorax).

The 25 percent of hospitals with the worst scores are docked 1 percent of their Medicare reimbursements across all diagnosis related groups. The question is how long will it take for poorly scoring hospitals to put technologies and protocols in place to move them into a category where they will be saving patients’ lives and institutional resources?

Health Care-Associated Infections, a new report by the Leapfrog Group, a Washington, D.C., quality and safety group which represents employers, consumers and other purchasers, shows that there is still a significant incidence of serious infections that are often fatal. Long-time president and CEO Leah Binder report that while hospitals are making some progress and more are publicly reporting their rates of infection, data show that rates of infection are high and alarming.

This Leapfrog report represents the first in a series of five reports, derived from the 2015 Leapfrog Hospital Survey, which will examine key nationwide hospital safety and quality data collected from more than 1,500 hospitals in the United States. Analysis was provided by Castlight Health and reports will be made available at http://www.leapfroggroup.org/HospitalSurveyReport/. Some of the highlights Include:
• With 67 percent of New Hampshire hospitals reporting a CLABSI rate of zero, the state’s hospitals stood out as the safest. At the bottom were Maryland and Rhode Island, where there was a complete void of hospitals reporting a zero rate.
• The report found that 25 percent of hospitals met the Leapfrog Group’s standard infection ratio (SIR) of zero for CLABSI with the remainder having high central infection line rates.
1(current)
2
3