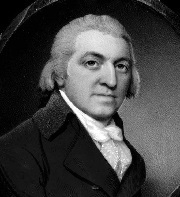 Craigie was born June 7, 1743. He was the son of a Scottish sea captain and a mother born in the British colonies. Not much is known of his early years. It’s recorded that he attended the Boston Latin School, but the trail of history disappears until Craigie is in his early thirties. It’s then that he’s appointed apothecary of the Massachusetts Army. According to accounts, he served admirably in this position, tending to the wounded at Bunker Hill. His efforts didn’t go unnoticed by those in power. He came to the attention of Samuel Adams, who subsequently brought his name up to George Washington. Washington, having never met Craigie, but trusting in Adams’ judgment, took the step of appointing Craigie as the Apothecary General on April 30, 1775.

In his new role, Craigie’s responsibilities included securing medicine and medical supplies for the continental army. Craigie traveled far and wide in order to gather the materials needed to create the medical chests that the army depended upon to treat the sick and wounded. If his contributions to the war effort were admirable, the dealings he had behind the scenes were less so.

It seems Craigie used his connections and the upheaval caused by the war as tools to get rich. And he started the mechanizations to obtain his wealth before the war even ended. He was invited into speculation by a former classmate at Boston Latin and the story starts to get cloudier from there. While much of what he did was on the proper side of the law, there are historical accounts of Craigie bribing officials to get insider tips, removing the guesswork of speculating. By 1791, Craigie was so wealthy from his legal and decidedly illegal activities that he was able to purchase one of the finest properties in Cambridge, Massachusetts — a mansion that had served as Washington’s headquarters during the war. He also shaped the makeup of Cambridge through different projects, like the bridge opened in 1809 that bore his name and connected Cambridge to Boston. Like many things involving Craigie, the bridge caused problems and protests. Craigie had streets rerouted in order to force people to have to use his toll bridge.
1(current)
2