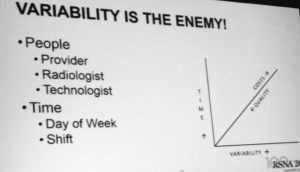 Instead, he made an honest admission. When he and Janet Champagne, his assistant director of Radiology, launched their initiative to improve a host of factors in their operations, their Press Ganey employee satisfaction scores were in the bottom third nationally.

“People are loyal to cultures, not to organizations,” Koroll told the audience.

Champagne said there were other reasons to reinvent the service culture as well; research indicates that a third of all health care expenditures are wasted.

“In a country that spends $2.5 trillion a year on health care, that means we’re wasting $760 billion a year,” she said. The core lesson in the case study of their experience at Texas Children’s Hospital is that the best solution is giving employees a voice. They shared how combining this bottom-up commitment to culture with known LEAN and 6th Sigma processes worked to address a known problem – a 45 day wait time for an MR conducted with anesthesia.

Koroll said that it was important to get some easy successes before tackling a bigger, more challenging issue. The two initiated a few employee-driven programs to rid the department work space of unnecessary supplies (creating a just-in-time supply chain) and equipment. Staff also began workflow-charting projects to take charge of improving their own efficiency.

With buy-in from these projects, the department – with participation from radiologists and senior administrators – was ready to tackle the 45-day waiting period problem.

“To embed a quality imperative in an organization you have to eliminate variability,” Koroll said as he displayed a slide titled, “Variability is the enemy.” He noted that variability increases procedure time, which drives up costs and is a drag on quality.

Champagne explained that they went through a process improvement model built around the acronym “DOWNTIME”. This yielded a litany of opportunities for process improvement. The concept covered a wide range of strategies, ranging from: leadership daily huddles (“a huge boost” according to Champagne); changing “feeling” language (“I think”) to measurement language (“According to the data”); and to, as much as possible, eliminate variability.

In the end, the two reviewed a host of process changes that were made to achieve the MR wait time reduction over about a three-month period. This ranged from releasing specific protocol slots in the imaging schedule sooner in the week. They also hit upon the idea to extend validated valet parking to the image locations across the system; this allowed parents to take their child home easier. And they reduced no-shows with calls from the pre-anesthesia nurses.

In the end, the two said employee-driven design turned out to also be good for business.

“We tend to be great avoiders of problems in hospitals,” Koroll told the audience. “But reducing variability through employees participation, to study, plan, do and act got great results for us.”

3M to spin off healthcare division by end of 2023