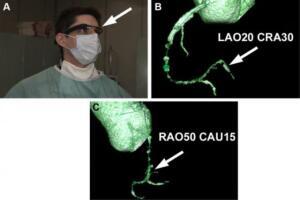 “Mobile technology is easily accessible and affordable, and offers an incremental opportunity to expand the existing open platform for mobile applications, which should in turn overcome the limitations of most advanced angiography systems with dedicated monitors for projection of CTA data sets,” Dr. Maksymilian Opolski of the Institute of Cardiology, Warsaw, Poland, told HCB News.

Because of that, coronary computer tomography angiography (CTA) is starting to be used more to guide cardiologists when performing PCI. The occluded coronary segment and the distal vessel territory can oftentimes be seen more clearly with coronary CTA versus invasive angiography.

During the procedure, 3-D CTA data sets can be projected on separate monitors in the cath lab, but that is very costly and constrained by space limitations. However, the researchers were able to successfully restore blood flow in the occluded right coronary artery of a 49-year-old man using CTA projections in a wearable virtual reality device based on Google Glass.

Opolski doesn’t think that all cardiac and surgical procedures will be aided with wearable computers in the future, but he does believe that procedures that heavily rely on modern imaging modalities including CTA and magnetic resonance tomography will.

“Another potential area where wearable computers might play an important role is remote mentoring that has the potential to enhance medical education and patient safety once widely available,” he said. “We all have this picture in mind when young doctors go to the operating room to pretend to see what the operator is seeing in a small field — a rather tough task for fellows-in-training.”