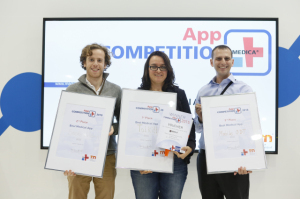 A photo-op for the
top three participants
MEDICA has long been recognized as the international medical business trade show to top all others. Globally, it is a must-attend industry event.

In recent years however, the show has provided increasing incentives to engage the U.S. market, specifically. This year, that has come largely in the form of the Connected Healthcare Forum, and a series of presentations and seminars conducted in English and directed at a few of the core concepts of tomorrow's care; interoperability, smart systems, and personalized medicine, to name a few.

On Tuesday afternoon those concepts collided in the form of MEDICA's annual app competition, which pits innovator against innovator for helpful prizes and recognition for designing the most disruptive mobile app for health care. The competition was hosted by Anders Johnard, who did a fine job harnessing his own personal Simon Cowell while keeping competitors from exceeding their three minute time limit.

The ten finalists, who represented a multitude of countries and were chosen from over 70 entrants, explained to an audience of health care professionals and a panel of reputable judges why their product was superior to the rest.

BrainControl showcased an app that allows people with limited mobility to move things, or indicate choices with their mind, iFeel Labs presented a game-style app that makes controlling asthma and breathing correctly fun, other apps for access to telehealth services, better relaxation, and big data utiization were also a part of the competition.

One company introduced its app with a heart wrenching video of a four year old boy who was born three months premature. He was unable to speak normally and yet his voice came across clearly as a voice-over narrative. The app that made his speech possible won first place.

"I want to speak but the words remain inside me," says the child, who also explains that he hopes to someday become a fireman. With an app called TalkItt he can speak clearly and be understood by anyone. The program works by learning how someone's voice sounds when they are trying to say certain things and then processes those patterns into a carefully translated clearer enunciation.

"1.5 percent of the world population is unable to speak like we do," said Maren Lesche on behalf of TalkItt. "They can't buy a cup of coffee or go to school or talk to relatives or tell their grandkids stories, and that's what we want to change."

TalkItt is trying to get customers in the U.S. and Europe and Lesche said they are doing clinical trials in Boston and are also active in Israel. Next year the company plans to give away a number of systems to build up their understanding of how to improve the technology and expand access to it.

In second place was a unique smart battery that is compatible with all electronic cigarettes. It tracks nicotine intake so that people who are using e-cigs to quite smoking can monitor their success (or lack thereof). According to the SmokeWatchers designer, Benjamin Choukroun, there are approximately one billion smokers on the planet. The health care ramifications are enormous, and he said he used the system himself to kick the habit.

In third place was MobileODT, an Israeli company that builds medical devices on top of mobile phones to allow them to have smart capabilities. The product it showcased was a CE-Marked cervical cancer screening tool that cuts costs and could improve care in developing regions.

Potential harm from faulty batteries leads to recall of over 4,000 GE ventilators