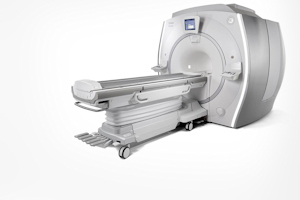 GE Healthcare's SIGNA PET/MR
With substantial funding provided by the Medical Research Council, the University of Manchester is poised to make big strides in dementia research. Using an award of £5.3 million, the number of PET/MR systems in the UK is set to increase from two to seven.

The funds are part of the Dementia Platform UK (DPUK), a multimillion pound public-private partnership to accelerate progress in dementia research. DPUK aims to detect dementia earlier, improve treatment, and ultimately prevent the condition — goals that can be facilitated by the aid of PET/MR.

While the five new systems will be purchased from a range of OEMs, plans are underway to bring GE Healthcare's SIGNA PET/MRI scanner to the Central Manchester University Hospitals NHS Foundation Trust (CMFT).

The new scanner is being purchased so that scientists and clinicians can better understand the causes and progression of dementia, and provide ways to to test the effects of new treatments. "Dementia is a condition that is poorly understood and difficult to treat effectively," said Professor Nigel Hooper director for Dementia Research at the University, in a statement.

As the global problem of dementia continues to worsen, Hooper said research needs to be increased, and PET/MRI could be a vital tool in understanding the condition.

The SIGNA PET/MRI scanner is expected to become operational in July 2016. Currently, a shelled space adjacent to the Nuclear Medicine Centre is being refurbished to house the three treatment rooms, the research office, and a radiopharmacy room, which will comprise the scanner suite.

"This scanner will put Manchester at the forefront of dementia research and we look forward to collaborating not only with our colleagues from the University, but also from other hospitals in Greater Manchester and beyond," said Christine Tonge, director of medical physics at Central Manchester.

"Being linked with the other four universities which are also purchasing PET/MR scanners will mean Manchester has the ability to become involved in multi-centre trials and research grants and contracts — increasing the effectiveness of the UK's research in this area," said Professor Alan Jackson, the director of the University's Wolfson Molecular Imaging Centre and the supervisor of the planned system.

DPUK is the world's largest study group for use in dementia research, pulling together two million well-characterized participants from over 30 national population studies.