A 19th century woman and pioneer of complex surgery 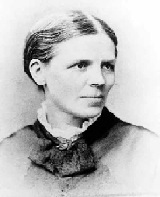 When Dr. Emeline Horton Cleveland considered a career in the medical field, she imagined herself working as a missionary in a foreign land. But history had a different plan for her. Cleveland became one of the first American female surgeons to successfully perform a major gynecological procedure. She also paved the way for female physicians looking to gain legitimacy in a male-dominated field.

Cleveland was born on Sept. 22, 1829, in Ashford, Connecticut. Her family soon moved to a farm in New York, where she turned to teaching for a number of years. Cleveland saved enough of her wages to apply to Oberlin College in 1850. That’s where she met Giles Butler Cleveland, who began his studies at Oberlin’s Theological Seminary around that time. The couple got married upon graduation, and Cleveland applied to the Female Medical College of Pennsylvania.

Her plans to travel abroad to do missionary work were put on hold because of her husband’s health issues. After completing her medical studies, Cleveland quickly set up a private practice in New York’s Oneida Valley to support her family. In 1856, the couple moved to Philadelphia so Cleveland could teach anatomy at the Woman’s Medical College. Her husband worked as a teacher until his health worsened and another illness left him partially paralyzed. Once again, Cleveland became the sole breadwinner.

Cleveland’s resilience did not go unnoticed. She was soon approached by Dr. Ann Preston about an exciting opportunity. It was not an easy time for ambitious women in the medical field. Philadelphia hospitals did not welcome female medical students in the clinics, keeping women from putting what they learned in class into actual practice with patients. Preston and a group of Quaker women had a vision for changing that. They planned to open their own hospital and make Cleveland the chief resident.

In 1860, the women’s group got together enough funding to send Cleveland abroad, so she could study obstetrics and gynecology. She learned about both clinical care and health care administration in hospitals in London and Paris. When Cleveland returned two years later, she put her knowledge to good use at the newly opened Woman’s Hospital of Philadelphia. In her new position, she established some of the nation’s first training programs for nurses and nurses’ aides.

When Preston died in 1872, Cleveland was the obvious choice to succeed her as dean of the Woman’s Medical College. In 1875, Cleveland became one of the first female surgeons to successfully perform a major gynecological procedure. Her patient had a painful cystic ovarian tumor, which filled her abdomen with fluid. Draining the fluid helped, but not by much, so Cleveland decided to operate. In an account of the operation published in a medical journal, the author noted that three weeks after the procedure, the patient looked healthy and “many years younger than before the operation.”

Cleveland’s pioneering achievement helped to dispel the notion that women lacked the scientific knowledge and emotional maturity to practice medicine, an opinion held by much of the male-dominated medical community at the time. In an address to a graduating class of female physicians, Cleveland noted her surprise at how quickly “the woman physician has come to be regarded as indispensable” in some parts of the country. She was too humble to take any credit for that shift.

In 1878, she was asked to serve as a gynecologist at the Department for the Insane at Pennsylvania Hospital. With this appointment, she reached another historic milestone, becoming one of the first female doctors to be hired by a major public medical entity. Unfortunately, she succumbed to tuberculosis that same year. Cleveland died at the age of 49, on Dec. 8, 1878. Per her final request, she was buried next to her friend and colleague, Ann Preston.