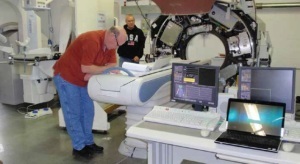 In 2012, Intermountain Healthcare, a hospital system based in and around Salt Lake City, Utah, established an in-house service program for the majority of its imaging devices. While still retaining some original equipment manufacturer (OEM) service agreements, Intermountain now has a team of 16 engineers that service 3,000 pieces of equipment spread out over 450 miles. The health system has a similarly diverse system for training its engineers, using a combination of resources, including internal training, independent training centers, such as the Solon, Ohio-based Radiological Service Training Institute (RSTI), which provides basic, in-depth X-ray training, and classes offered by vendors, including GE and Toshiba.

“We’ve found that effective, depending on what our needs are,” says Jeff Koford, imaging equipment service program manager for Intermountain Healthcare. When engineers are first hired at Intermountain, they go through on-the-job training, where they shadow a more senior engineer. Engineers have later been sent to RSTI in Ohio to receive X-ray and C-arm training; GE’s training facility in Waukesha, Wis., to learn about maintenance for X-ray, CT and MR equipment, including GE’s Precision 500D radiography/fluoroscopy system; Toshiba’s Institute of Advanced Imaging in Irvine, Calif., for training on their Aquilion CT system; and the AllParts Medical multivendor training center in Nashville, Tenn., for training on the GE Proteus radiography room and on GE’s portable X-ray machines. RSTI’s president, Dale Cover, says his company offers a good value for training inhouse engineers to service their own equipment, which is much less expensive than OEM service contracts.

RSTI has been operating for 30 years, providing everything from basic X-ray, CT, MRI, ultrasound and nuclear medicine courses to training that covers specific models of X-ray, mobile C-arms, and cardiac catheterization lab and CT equipment. “A service contract is a safety net,” Cover says. “A lot of places feel safe, but it’s the most expensive delivery for service.”

That’s not to say Cover believes service contracts don’t have a place in hospitals. RTI offers a course in capital asset management, helping hospitals strike the right balance byhaving some service contracts and some equipment maintained in-house. For example, if an expensive cath lab isn’t under a service contract and no one on staff is trained on it, there’s a risk of excessive down time.

“It all depends on a hospital’s willingness to take on risk,” Cover says. “If they’re doing the service themselves, they carry the risk of having to provide the service and they carry all the cost. Some repairs may be costly but you’re going to save overall, because you can save a lot of money on other systems.”
1(current)
2
3
4
5
6