fMRI scans show how humans form concepts, may be useful in Alzheimer's 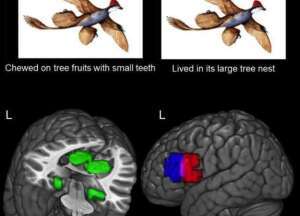 Photo credit:
Carnegie Mellon University
Using Functional MRI (fMRI) scans to peer into the brain could revolutionize understanding of how people learn things, while also shedding light on neurological disorders such as dementia and Alzheimer’s disease. A study published in Human Brain Mapping illustrated this by observing 16 subjects as they were discovering the eating habits of a newly identified species of bird called the olinguito.

“We know how downloading new software on a computer changes its memory system in precise ways, but we are only beginning to understand how learning a new concept changes the human brain,” Andrew Bauer, a Ph.D. student in psychology at Carnegie Mellon University (CMU) and lead author of the study told DOTmed News.

“We are discovering where and how the brain is reconfigured as a result of learning new animal concepts by watching as the brain changes during learning in real time. By catching the brain in the act, we come to understand fundamental principles of brain organization and function, namely how information is neurally stored and processed,” explained Bauer.

The study is part of a program at CMU to merge brain studies under its BrainHub program and instruction innovation under its Simon Initiative to improve student-learning outcomes. According to academic study oversight professor Marcel Just, when the test subjects learned that the new bird species ate mainly fruit instead of meat, that information was stored in the same specific region of the brain – the left inferior frontal gyrus - of each test subject. These findings indicate that the brain stores a new concept in the exact place, indicating a sophisticated neuro filing system.

“The current study monitored the brain changes as people learned new concepts, but the same approach might work for tracking the brain changes as someone forgets concepts that used to be familiar to them,” Bauer added. “It may be possible to detect early onset of Alzheimer’s disease or dementia by observing that the brain patterns underlying certain memories or concepts are disorganized or shrinking, even before the memories start to fade away.”

The research could foreshadow profound improvements in classroom instruction methods according to Bauer. Such fMRI brain scans could pinpoint what parts of a high school physics lesson, for example, a student failed to learn, by observing what brain changes do not occur in the concept creation stage of the lesson.

“This diagnostic tool of peering directly into the brain could complement other means of assessing learning, such as paper-and-pencil tests,” he said. A Siemens Verio 3T MR scanner was used in the study.