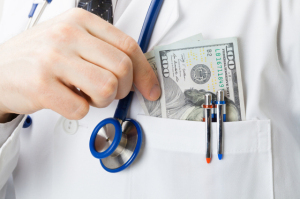 A report by the U.S. Government Accountability Office (GAO) cited the Centers for Medicare and Medicaid Services (CMS) for overreliance on physician input through the American Medical Association (AMA) in setting Medicare reimbursement for their services. James C. Cosgrove, director of health care at the GAO, told DOTmed News the review was not a self-initiated study in response to any concern, but required under the Protecting Access to Medicare Act of 2014.

The report said that CMS complies with statutory requirements to review all Medicare services every five years, but faulted the agency for not maintaining a database to determine when it last reviewed the relative value of a given service.

In a summary, the report offered several points for improvement, mostly around oversight and transparency in the methods CMS uses to determine $70 billion in Medicare payments to doctors every year. According to the report, CMS overly relies on the Relative Value Scale Update Committee (RUC), a committee of the American Medical Association and national specialty societies, to determine resources used in treatment.

These are measured in relative value units (RVUs). CMS says each RVU is currently worth about $36, and the RUC recommends the number of RVUs and direct practice expense inputs associated with each of the more than 7,000 services and procedures for which Medicare pays doctors. CMS determines the final RVUs assigned to each service.

“None of the physicians on the RUC are saying ’How can I game the system to make more money’,” Dr. Robert Wergin, current president of the American Academy of Family Physicians, told DOTmed News.

Wergin, who is himself a practicing family physician in southeast Nebraska, said physicians on the panel strive to recommend the resources required for a procedure – and they regularly return to reassess procedures over time.

“When laparoscopic cholecystectomy was first introduced, it took two hours on average. But as doctors became more proficient at doing this procedure, the time involved has dropped to less than an hour. The review process should reflect that change,” explained Wergin.

While Wergin feels that primary care representation has improved over the years on the RUC, the demands of population wellness management, which includes health management through Accountable Care Organizations (ACOs) under health care reform laws, will require more primary care physicians.

“We know from past experience that when ACOs are led by primary care physicians, we see better outcomes, quality and cost savings. We are trained on how to effectively coordinate care,” said Wergin. “One of my sons has just graduated from medical school and will start a family medicine residency this summer. He’s over $200,000 in debt. If we want medical students to consider a career in primary care, we do have to look at this issue of income differences between sub-specialists and primary care physicians.”