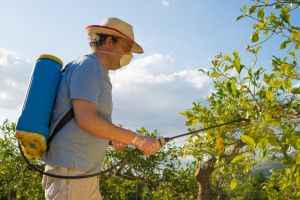 Insecticides are causing
costly neurological damage
Exposure to endocrine (or hormone)-disrupting chemicals (EDCs) may be costing countries in the European Union 1.23 percent of their gross domestic product. Those staggering numbers were unveiled in studies published in the Endocrine Society's Journal of Clinical Endocrinology and Metabolism, and are considered conservative.

EDCs, which can be found in everyday items like paper receipts, food can linings, flame retardants and pesticides, interfere with the body's natural hormones.

The researchers found that pesticides were the single factor contributing to the most health care expenses, while the main condition by a similar landslide was neurological effects.

The study estimated the harm done to unborn children costs the EU between $53.43 billion and $208 billion annually. About 13 million lost IQ points and 59,300 additional cases of intellectual disability per year can be attributed to insecticide, or organophosphate, exposure.

"Although this analysis was limited to the European Union, the disease and cost burden of exposure is likely to be on the same order of magnitude in the United States and elsewhere in the world," said Dr. Leonardo Trasande, associate professor of pediatrics, Environmental Medicine and Population Health at NYU Langone Medical Center.

Nearly 100 percent of people have detectable amounts of EDCs in their bodies. The researchers hope that by illustrating the massive cost to society of using hazardous EDCs, they can inform policy-makers in the environmental health arena and improve regulations of toxic chemicals.

ED visits for respiratory illness down 62% among children: Study