Special procedure rooms: will TAVR shift to the cath lab? 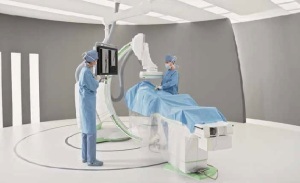 The Siemens Artis one
Angiography System,
a floor-mounted system
that covers a broad range
of procedures, was FDA
approved in May 2014.
From the March 2015 issue of HealthCare Business News magazine

Special procedure rooms are coming into their own, driven by both innovation and the need to justify costs that has come to be a dominant trend driving change in the health care landscape. For example, transcatheter aortic-valve replacement (TAVR) is generally done in a hybrid operating room, but the conventional wisdom is that the open-heart surgery alternative will eventually migrate into the cardiac catheterization lab, resulting in a substantial cost savings.

A small study published in the August 2014 issue of JACC Cardiovascular Interventions looked at 142 patients, 70 who underwent TAVR with the Edwards Sapien valve in a cath lab, and 72 who had the procedure performed in a hybrid OR. According to the paper, all procedures in the cath lab were successful, with one patient intubated, while three patients in the hybrid OR had a procedure- related death. There was no significant difference between the two groups in mortality at 30 days, and both 30 day stroke/ transient ischemic attack and moderate or severe paravalvular leak were similar. Procedure room time, length of stay and costs were all lower in the cath lab procedures, by close to $10,000.

“The NCD (national coverage determination) has been firm in saying that the procedures should be done by a heart team consisting of a surgeon and a cardiologist,” says Dr. David Holmes, a past president of the American College of Cardiology and professor of medicine in cardiovascular disease at the Mayo Clinic. “NCD doesn’t say…it needs to be done in the cath lab and it doesn’t say it has to be done in the OR. The majority are still done in OR by virtue of the fact that the catheters are large in size. As the catheters get smaller and smaller, it gets more feasible to do these in catheterization laboratories.”

Holmes notes that if a facility were to perform TAVR in the cath lab, it would need a very good system to handle emergencies that require bypass surgery. “They need to be an expert center with an expert heart team,” Holmes says. “Not any facility in a small town someplace can get started.”

Tom Watson, a clinical analyst at MD Buyline with more than 35 years of experience in the field of cardiovascular medicine, agrees. He notes that it’s a generally accepted belief that less risky TAVR procedures will evolve into the more traditional cath lab, much like what happened with balloon angioplasty years ago.

“I believe it would still be limited to facilities that are capable of doing open-heart surgery valve replacements,” Watson says. “I think we’re still several years away from that becoming a reality, but that’s a very common theory.”
1(current)
2
3
4
5

iRhythm Technologies teams with Verily for early detection of AFib

Preparing for the coming increase in stroke and physical therapy patients

Staying ahead of the value-based curve with robotics