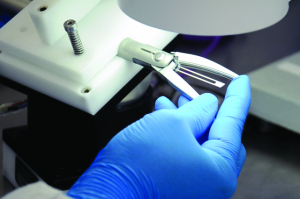 A LigaSure jaw blade goes through
inspection during reprocessing.
Image courtesy of Stryker.
From the January 2015 issue of HealthCare Business News magazine

Since becoming an early adopter of single-use device reprocessing back in 2002, St. Joseph Health System is now saving nearly $3 million a year for its 16 hospitals in California, West Texas, and Northern New Mexico, and diverting 80,000 pounds of medical waste from landfills.

St. Joseph didn’t achieve such a huge cost savings without some challenges. The first hurdle came with educating and communicating with physicians on the benefits of reprocessing equipment ranging from harmonic scalpels to electrophysiology catheters, something that’s been regulated by the U.S. Food and Drug Administration since 2000.

More recently, the challenges have come from surgical supply vendors, who presumably aren’t happy with revenue lost to the reprocessing industry, which is expected to see tremendous growth. A report published by Transparency Market Research in September 2014 projected that the global reprocessed medical devices market was expected to grow at a 19 percent compound annual growth rate, reaching $2.58 billion in 2020.

James McManus, vice president of finance for St. Joseph Health System, says they had to take a bit of a hard line with some of their vendors.

“We were pretty upfront with the OEMs, saying we are a reprocessing organization and we expect you to respect that,” McManus says. “Most organizations we work with understand our position.”

Some vendors have included wording in contracts to inhibit single-use device reprocessing, something that officials at St. Joseph have had to actively look out for.

“There have been a couple contracts we have not signed because it specifically said we could not reprocess your products,” McManus says.

There are also contracts that provide a discount for not reprocessing to offset savings from reprocessed devices, which can cost 50 percent less than new ones. According to a buyer’s brief by MD Buyline, a new ultrasound catheter can cost anywhere from $2,200 to $2,744, while a reprocessed one can cost a little more than $1,500. A new long shears curved harmonic scalpel could cost $368 to $629, but a reprocessed one might only cost $170 to $225.

But even when the savings from reprocessing wasn’t better than the discount, “we felt it was more important for us to stick with our beliefs on reprocessing,” McManus says.