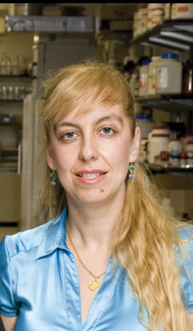 Dr. Ekaterina Dadachova,
professor of radiology
at Albert Einstein College of Medicine
A tumor-shrinking radioactive agent could be reprogrammed to target and kill HIV-infected cells instead, possibly paving the way for a cure for the disease someday, researchers from Albert Einstein College of Medicine announced today at the Radiological Society of North America annual meeting.

35 million people are living with HIV now, and approximately 8 million have access to antiviral drugs.

The study's results showed that when mice were injected with HIV-infected human lymphocytes and treated with radioimmunotherapy, HIV infection in the blood samples were reduced to undetectable levels.

The therapy works by pairing virus-fighting antibodies from the body's immune system with radioactive isotopes to deliver radiation to the target cells in the body.

Current antiretroviral treatments for HIV successfully keep the virus from multiplying and have transformed what was once a sure death sentence into a chronic but manageable condition.

But these drugs fall short of a real cure because they're unable to kill inactive HIV-infected cells still circulating in the brain, capable of causing problems such as mental impairment and cognitive decline.

"If someone stops taking the drug, the virus starts coming back within a week because there are reservoirs of infected cells hiding in the organs," said Dr. Ekaterina Dadachova, professor of radiology, microbiology and immunology at Albert Einstein College of Medicine in New York.

Since antiretroviral medication can't safely treat cells in the brain and nervous system, an important component of the study focused on whether this treatment was capable of treating the virus in the brain as well.

Treating an in vitro model with radioimmunotherapy, researchers showed that it may be possible to use this therapy to target brain and nerve cells without causing harm to the nervous system itself.

Though the research shows promise, it hasn't been tested yet on live humans, only blood samples — but Dadachova and her colleagues hope to start trials on AIDS patients soon.

The study's release coincides with an announcement from President Barack Obama on Monday of a new $100 million initiative at the National Institutes of Health aimed at developing new therapies to cure HIV.