Risk factors for Alzheimer's may start in infancy 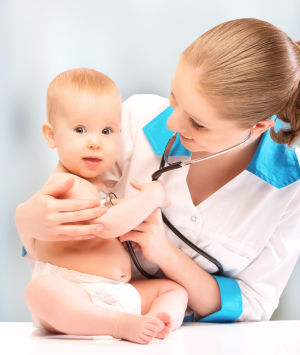 Researchers at Brown University's Advanced Baby Imaging Lab have found that infants who carry a gene associated with increased risk for Alzheimer's disease tend to have differences in brain development compared to children without the gene.

The study, published in JAMA Neurology, imaged the brains of 162 infants between the ages of two months and 25 months. After performing DNA tests, sixty of them were found to have the E4 variant — the gene that has been associated with an increased risk of Alzheimer's.

The novel MRI technique quiets the machine to a whisper, enabling the brains of healthy babies to be imaged while they sleep without medication.

The scans showed that children who carry the variant gene had a different pattern of brain growth than other children, with increased growth in areas in the frontal lobe and decreased growth in the middle and rear parts of the brain.

This is significant, since the areas of decreased growth synced up with the parts of the brain that tend to be affected in elderly patients with Alzheimer's disease.

But should parents fret if their babies carry the higher-risk gene? Researchers say no. "Although 20-25 percent of the population has this variant gene, not everyone that carries it will have Alzheimer's," said lead study author Douglas C. Dean of Brown University.

Indeed, recent research shows that genetic predisposition is only part of the puzzle when it comes to predicting diseases like Alzheimer's; other factors such as environment and lifestyle can play a significant role in how those genes are actually expressed in each person.

The technique also enables imaging of both gray matter — the part of the brain that contains neurons and nerve fibers — and white matter, which contains the fatty material that insulates the nerve fibers. Imaging both gray and white matter is important for Alzheimer's research because they're each thought to play a role in the disease.

While previous research has shown differences in the brains in patients in their mid-twenties to early thirties associated with Alzheimer's risk, this is the first study showing that the differences may start far earlier than anyone expected.

"What we've done wound that clock even further," said Dean.

When Dean and his team began the study, they weren't sure what to expect. "The fact we found significant differences in how the brain develops we thought was pretty surprising," he said.