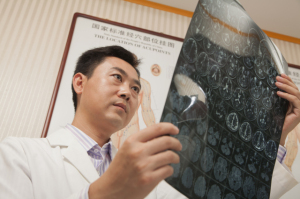 China's X-ray market
is set to reach $1.5 billion by 2017.
The Chinese X-ray market is set to grow 50 percent thanks to ongoing health care reform measures, according to market research firm IHS Inc.

The market is forecast to reach $1.5 billion by 2017 at an annual growth rate of 8.3 percent. This means that the Chinese market alone would account for 22 percent — nearly a quarter — of the global imaging market by 2017, ranking among dominant markets in Europe, the Middle East, and Africa. According to IHS, the $1.5 billion dollar market for radiography also includes mammography, mobile C-Arm, and cath angio.

A major driver of this market growth is set to come from the country's push for health reform, which seeks to develop more market incentives for medical innovation in the face of significant expanded growth from greater public-sector spending on hospitals as well as the introduction of private hospitals and for-profit clinics.

In general, the diagnostic imaging market in Asia is growing at a rate greater than any other in the world.

The market, valued at $8 billion in 2012, is expanding at an average annual rate of ten percent.