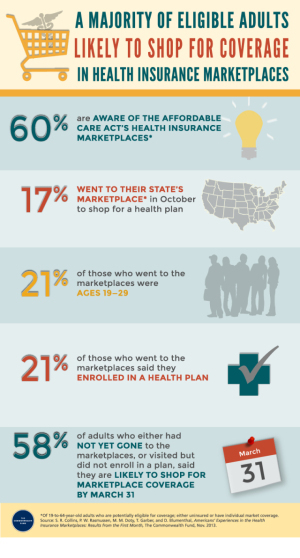 The Commonwealth Fund
October survey results
A new survey released by the health care think tank Commonwealth Fund shows that while 60 percent of eligible respondents are now aware of their health insurance coverage options, just 17 percent visited new marketplaces in October to shop for a plan.

Ultimately, only one in five visitors enrolled in a plan, though this may soon change — a majority of respondents indicated that they would either look into enrolling or find out whether they were eligible to enroll.

The telephone survey, conducted October 9-27 this year, interviewed 682 adults ages 19 to 64 who were potentially eligible for the law's new coverage options.

Compared with results from a Commonwealth survey conducted earlier this year, awareness of the new health care coverage options has significantly increased over the last few months — up from one-third to 60 percent.

About one out of five adults (21 percent) visiting the marketplace websites were ages 19 to 29.

Experts have voiced concern that the health enrollment site's woes might have a particularly negative impact on youth enrollment. Because young people are a relatively healthy demographic, it's widely acknowledged that getting them to enroll for insurance is an uphill climb.

The White House has used microtargeting marketing techniques to reach out to young people in hopes that they would make up 40 percent of health care exchanges.

Nevertheless, the health enrollment's rocky rollout has had a negative impact on enrollment, as 37 percent of those that did not enroll cited technical difficulties as a reason.

Overall, a majority of survey respondents seem determined to enroll, with three out of five adults who either had not yet shopped for a plan or were not yet enrolled in a plan saying they were very or somewhat likely to visit by the end of the enrollment period (March 31, 2014) to enroll in a plan or find out if they are eligible for financial help.