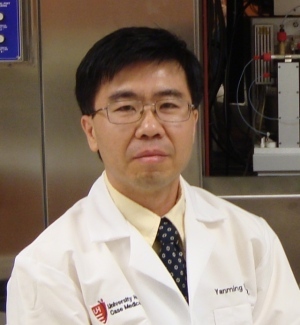 Dr. Yanming Wang and his team
developed a biotracer for MS
A brand new biomarker that helps visualize multiple sclerosis could one day do for MS what Amyvid has done for Alzheimer's disease.

Associate professor of radiology, chemistry, and biomedical engineering Yanming Wang and his team at Case Western Reserve University developed the biomarker to fill a void in the market.

Physicians currently lack an imaging technique that detects and quantifies myelin sheath damage in the central nervous system — one of the key symptoms of the disease. Myelin damage disrupts nerve signals, resulting in mobility and cognitive dysfunction.

Though MRI can detect brain lesions associated with MS, the lesions could also indicate other unrelated conditions such as edema or inflammation. Doctors rely primarily on behavioral tests to diagnose people with MS.

Multiple sclerosis is the second most common neurodegenerative disease after Alzheimer's.

Experts estimate that between 250,000 to 350,000 people in the United States suffer from the disease. Unlike Alzheimer's, the disease affects young people as well.

Since PET is particularly suited to highlight intact myelin, over the past 10 years researchers have attempted to develop a PET tracer that can visualize myelin damage. With the biotracer, doctors can measure how much myelin remains intact and how much is damaged — an industry first.

Researchers were interested to note that myelin was particularly good for imaging the myelin sheath in the spinal cord — a notoriously hard organ to image.

The test can be used to monitor the progression of the disease over time. But could the scan also be used for diagnosis? "If you have a cohort of patients [copmprising] normal, healthy subjects, you can get the average outtake and use that as a guideline," Wang said.

In the future, Wang sees two major applications for the probe.

One is to aid researchers in developing a drug to treat MS. Currently MS is treated with symptom-modifying therapy, but to really cure the disease, researchers need an imaging tool that allows them to develop a drug that repairs myelin.

The tool could also potentially be used to monitor the progression of the disease in high-risk individuals so that doctors can treat them before they develop symptoms. "Early treatment is key to treating the disease efficiently," said Wang.

PET is a widely used imaging technique, but its uses are currently limited due to a lack of probes. "This is another step forward to enhance the potential to use PET in routine clinical settings," said Wang.

Researchers are currently initiating clinical trials to get the ball rolling on making the probe available for wider use.