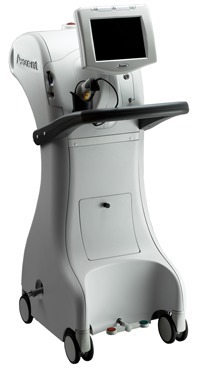 The Skin eBx from iCad.
Skin cancer is the most common cancer in the United States. Treatment of non-melanoma skin cancer, generally skin-marring surgery, increased by almost 77 percent between 1992 and 2006. Now, several radiation therapy manufacturers are offering a non-surgical option for treating skin cancer without leaving a scar.

"My co-worker has 21 scars on her arm, and she's only 32," said Michelle Joiner, director of Global PR and brand management at Elekta. At ASTRO, the company showed a new electronic brachytherapy solution called Esteya designed for treating non-melanoma skin cancer. Besides its cosmetic benefits, the method is also effective for areas that are hard to reach surgically, such as the top of the head.

At first, Elekta plans to market the system to radiation oncologists, but the company hopes to eventually introduce it to dermatologists as well. It's currently pending 510k approval.

The brachytherapy company iCad has already found that dermatologists are now working with oncologists to treat skin cancer. The company showed its new brachytherapy treatment for non-melanoma skin cancer, Skin eBx, at ASTRO.

The treatment is also a good option for international health care providers. Because it's portable and does not require a shielded room, smaller providers can treat patients with radiation without making a large investment.

Varian also reported an increased interest in brachytherapy for non-melanoma skin cancer, noting that it's a way customers can use equipment they already own in additional ways.

On the financial side, all three companies reported that at least a temporary reimbursement code is in place for radiation oncology for skin cancer, making it similar in price to high-end surgery.