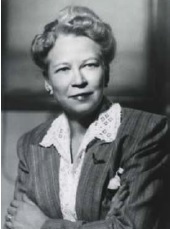 In 1919, the science of radiology was still in its infancy. Though X-rays and radium could treat tumors, doctors had yet to establish standard techniques for applying safe, yet effective doses of radiation.

Research physicist Edith Hinkley Quimby (1891-1982), who passed away on October 11, 1982, helped develop diagnostic and therapeutic applications for Xrays, radium, and radioactive isotopes that allowed physicians to determine the exact dose needed with the fewest side effects.

Quimby was already a trailblazer as a student, attending Whitman College in Walla Walla, WA on a full scholarship as its first female math physics major. She taught for two years as a science teacher before entering the University of California at Berkeley, where she obtained her master’s degree in physics in 1916. There, she met and married physics student Shirley Quimby.

When Shirley Quimby’s work took them to New York City in 1919, Edith secured a job at the New York City Memorial Hospital as an assistant physicist. She began her career in radiology at the Memorial Hospital, where Gioacchino Failla had established the first research laboratory devoted to the medical uses of radiation. At that time, she was the only woman in America engaged in medical physics research. As Quimby matter-of-factly recalled, “This job turned up. I took it.”

Though radium was widely used to treat cancer at the time, there were no established techniques for its use and radium needles were often administered in a haphazard, makeshift fashion with no certainty that the tumors were actually being treated effectively.

Quimby was the first to measure radiation doses in tissue and determine the levels of radiation that the human body could tolerate. The techniques she eventually developed in 1932 for effective grouping of radium needles for dose exposure were widely adopted in the United States.

Throughout her career as both educator and researcher, Quimby continued to make significant advances in the field of radiology and nuclear medicine as a whole.

For example, her research on the effects of radiation on the skin was especially useful to the scientific community. She quantified the different levels of dose required to create the same biological effect, thereby pioneering the concept of the relative biological effectiveness of radiation (RBE) — an important metric still used to quantify and measure dose today.

In 1940, in recognition of her work, she was the first woman to receive the Janeway Medal of the American Radium Society. She later became interested in clinical work with artificially radioactive isotopes, which were available from cyclotrons. She also performed some the earliest research in radioactive sodium and radioactive iodine.
1(current)
2