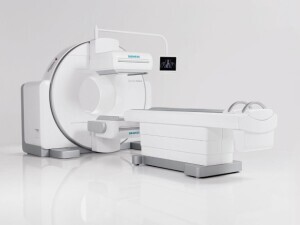 Siemens' Symbia Intevo
has received 501(k) clearance
Siemens Healthcare announced Thursday that the U.S. Food and Drug Administration has granted 501(k) clearance for Symbia Intevo — a new system that aims to overcome some limitations of traditional SPECT/CT to create what the company is calling a new modality: xSPECT.

Notably, the system is the first to offer a quantification feature that allows physicians to measure the tumor's level of metabolic activity.

Though therapeutic monitoring had always been the aim of SPECT/CT, the modality's lack of fine accuracy has hindered its use for this purpose.

Now, according to Siemens, this may finally change with xSPECT's ability to put numerical metrics to the disease.

The system also aims to change how the image is captured and processed through both systems.

Though traditional SPECT/CT mechanically fuses SPECT and CT images together, the inherent mismatch between SPECT and CT requires that SPECT be used as the starting frame of reference, resulting in lower anatomical specificity.

Using new advanced detector technology, Symbia Intevo uses CT as the common frame of reference, giving doctors more specific anatomical detail that may help them differentiate cancer from other forms of disease, which is notoriously difficult to do in traditional SPECT/CT.

"We're not not only able to diagnose the level of the problem, but what is causing the problem in each specific patient," said Dr. Jerry Froelich, director of nuclear medicine and molecular imaging at University of Minnesota.