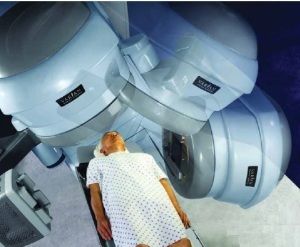 Proton therapy has a prostate problem because prostate cancer is the most common form diagnosed in men and can be treated more quickly compared with other forms of cancer, centers are able to treat a steady flow of prostate cancer patients. It also gets reimbursed by CMS, unlike most other proton therapy treatments. But after several studies questioned the long-term benefits of proton therapy for prostate cancer, the therapy’s image took a beating.

“Unfortunately, the discussion around coverage for proton therapy is clouded by this controversy with prostate cancer,” says John Kerstiens, COO and CFO at Indiana University Health Proton Therapy Center. “You see articles where all they write is ‘outcomes for proton therapy are no different from other therapies,’ and they drop the word prostate.”

Two studies published in April 2012 kicked off that debate on the value of proton beam therapy for prostate cancer. While proponents say the treatment reduces side effects, such as urinary incontinence and sexual dysfunction, one study published in the Journal of the National Cancer Institute found that though urinary incontinence side effects were less severe for proton therapy than other treatments in the first six months, after that time, those benefits faded and there was no difference in side effects between proton therapy and IMRT, another radiation therapy technique.

And controversy aside, vendors and physicians report better results and promising experiences in treating a swath of cancers, from challenging breast cancer cases to stubborn liver tumors, for both proton therapy and traditional radiation therapy. Practitioners and OEMs hope results and feedback can dispel any controversy.

Proton proliferation
At time of writing, there are 11 operating proton therapy centers and 17 under development or construction. Proton therapy is popular, despite the fact that building a center can cost upwards of $100 million — and for the most part, the return on investment is slow.

“Proton therapy is extraordinarily expensive in terms of the equipment, the staff, treatment times — it just doesn’t allow for you to get the reimbursements you need to cover a lot of those costs,” says Kerstiens. “With the exception of prostate cancer, patient treatment times are very lengthy. So if you’re not treating a lot of prostate cancer, it’s going to be a challenge to recover your original investment.”
1(current)
2
3
4
5