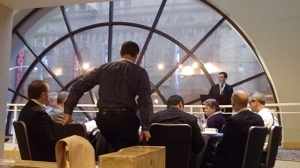 Wayne Webster speaks
during IAMERS' opening
breakfast on Thursday.
Hospital executives mulling new equipment buys and used medical dealers trying to do business in an increasingly stormy market ought to pay closer attention to global economic trends and the expected shakeup from accountable care organizations, according to presenters at the 20th annual meeting of IAMERS held in New York on May 2.

"The real question is, how do we thrive in chaos?" Wayne Webster, a long-time IAMERS member and consultant with Proactics, told attendees at the two-day event, which ran May 2-3 at the Crowne Plaza Hotel in Midtown.

The keynote speaker, Dr. Giuseppe Ammendola, an economics professor at New York University, offered a rough sketch of the world economy, and pointed to events that could have knock-on effects around the globe, such as how China's growth is eroding its advantages as a cheap labor source, and the dangers to countries like Greece if it drops out of the Euro Zone, as some analysts predict it might over the summer.

"Everything we wear, everything we do, is related to this," Ammendola explained. "Even if your business takes place in a radius of 10 miles from your base, you're part of the global economy."

Broader trends aren't just macroeconomic. Providers should also keep tabs on equipment lifecycles if they want to avoid serious financial losses, according to a talk by Charles Gauthier with Shared Imaging.

Hospitals often don't follow OEM product lifecycles and end up buying equipment right as the manufacturer releases a more powerful upgrade, resulting in a sharp depreciation in value of their expensive, new machine, he said.

In his talk, Gauthier shared a series of "horror stories". One hospital he described bought a 0.7-tesla MRI, when the manufacturer released a 1.0-tesla while it was being installed. Another facility bought a CT scanner six months before the OEM released a 16-slice model that was four to six times more powerful. And yet another saw an MRI lose $250,000 in value right after it was upgraded.

"That is career-altering for a CFO," Gauthier said.

He recommended hospital executives and service managers consider a witch's brew of market forces, changing demographics, debates in Washington, device competition and other factors when preparing for equipment buys. He also suggested that hospitals, dealers or servicers plot out maps for purchases to gauge risks affecting the real value of the equipment.

They can also keep an eye on the FDA's 510(k) premarket notifications through the agency's website to learn about upcoming equipment and get a feel for the rhythm of the product cycles to know when to buy, or went to rent an interim, or "bridge", device and hold out to purchase a new release.
1(current)
2