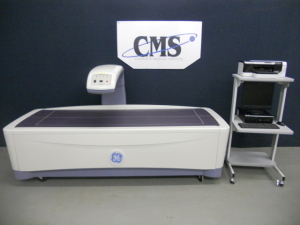 Founded in 1996, CMS has a long history with GE, buying the company's trade-in and refurbished bone densitometers, Rubinoff said. The company, based in the Detroit suburb of Sterling Heights, Mich., already sells GE's new Achilles systems.

Rubinoff said the company has a significant dealer presence in the U.S. and can reach smaller private practices, while GE's focus is more on hospitals. Rubinoff said his company plans to market to family practices, urology clinics and chiropractors.

The needs of those customers are changing, however. As reimbursements for bone density scans to check for osteoporosis have declined, Rubinoff said the push now is for "health and wellness" applications, such as keeping tabs on body fat.

DXA scanners are capable of performing body composition analysis, giving an exact measurement of body fat percentage. Late last year, GE also released Corescan software for some of its systems, which allows users to quantify visceral fat, the fat between organs and a leading indicator of disease, Rubinoff said. These applications generally are not reimbursable by insurance plans, however, and patients have to pay for them out-of-pocket.

In any case, Rubinoff said with the new equipment offerings, his company can target practices with different budgets.

"We have a solution for everybody, and that's what’s exciting."