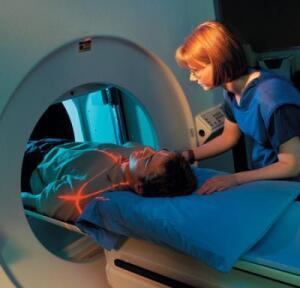 A group of radiologists pore over CT scans, looking for lesions. While they do a pretty good job finding anomalies, nearly all of them miss the 800-pound (or rather, 80-pixel) gorilla. Literally.

In a small study, 83 percent of radiologists hunting for tumors in a series of CT slides missed an image of a man in a gorilla suit in the upper-right side of the frame, according to a write-up of the study by Wray Herbert for the Association for Psychological Science. The study, which has not yet been published, should appear in a future issue of the journal Psychological Science.

The experiment, carried out by Jeremy Wolfe's lab at Brigham and Woman's Hospital, is a nod to the famous "gorilla basketball" experiment, where participants were asked to watch a video and count the number of passes of a basketball between players. At one point in the video, a man in a gorilla suit strides by, and most volunteers don't notice him and can't remember having seen him. They were suffering from what's now called "inattentional blindness."

For the study, the researchers apparently showed 24 radiologists and a similar group of untrained volunteers a series of lung CT scans from five patients. Everyone was asked to find 10 "nodules" hidden in the scans. In the last series, the tiny gorilla appeared in five images. While small and maybe a bit hard to see (it's a mostly black image on a black background), the gorilla image was nonetheless 48 times bigger than the nodules the radiologists were looking for.

The results: 20 of the 24 radiologists missed the gorilla. However, many of them "saw" the beastie, as eye-tracking data apparently shows that they looked at it, they just never realized that they did. Still, they did better than untrained volunteers, all of whom skipped the simian, according to the write-up of the study. Also, the doctors did better at picking out the nodules.

So how serious is this? Herbert admits that this kind of visual search is "notoriously difficult" but that it could be worrying that "83 percent of these highly trained physicians missed what might have been a life-threatening anomaly." Nonetheless, some caveats are in order: the study isn't out yet, and in any case it's a small one.