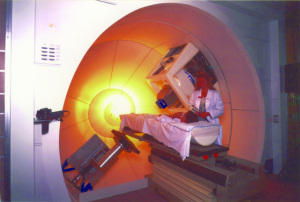 Proton therapy may treat
breast cancer more effectively than radiation.
Proton beam therapy may offer breast cancer patients the benefits of radiation without some of its serious side effects, which include heart disease.

Radiation oncologists from cancer centers around the country will meet in Phoenix on Friday to discuss the use of proton beam therapy to treat breast cancer.

Scientists have long known that breast cancer patients who receive radiation therapy face higher risk for heart attacks and other heart-related problems 15 to 30 years down the line. The risk is particularly pronounced for women who receive radiation treatment for their left breast because it's located right above the heart. Since proton therapy precisely targets cancer cells without damaging healthy tissue, it may be a more effective treatment option for select breast cancer patients.

An estimated 230,000 women are diagnosed with breast cancer in the U.S. every year. Experts estimate that just under half of those women receive radiation therapy — typically newly diagnosed patients who have a localized lesion in the breast. After undergoing a lumpectomy, the patient receives radiation targeted at the remainder of the breast tissue or the area where the tumor used to be to eliminate all traces of the cancer.

A startling number of older women with high-risk advanced breast cancer — nearly half — forgo recommended radiation therapy after their mastectomy, a 2011 study shows. Though doctors still don't know the reason behind this trend, the consequences are serious: the cancer will return for 30 to 40 percent of those women.

In the bigger picture, breast cancer patients who receive radiation therapy fare much better on average than patients who forgo radiation because they have lower rates of cancer recurrence. However, they also face a higher risk of secondary complications.

One Norway study that examined coronary disease among breast cancer patients found that patients who received radiation therapy in the left breast had a much higher chance of having constricted blood vessels in the front of the heart, where radiation exposure would have been more likely. These patients are consequently at much higher risk for heart attacks and/or heart muscle damage.

Radiation oncologists treat breast cancer by aiming the beam at an angle across the chest, inadvertently exposing parts of the lung and heart to radiation. Proton therapy largely sidesteps this problem because it offers depth control: "It goes in a certain distance and stops — so we can treat the chest wall as the patient receives less radiation dose and we can also avoid the heart and the lungs," Dr. William Hartsell, medical director of the CDH Proton Center, A ProCure Center, told DOTmed News.
1(current)
2