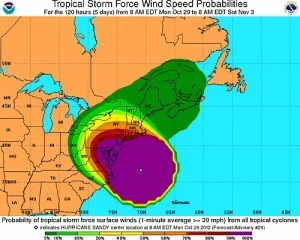 The Health and Hospitals Corporation, which runs NYC's public facilities, said hospitals have canceled elective surgeries and outpatient clinic appointments today and tomorrow as a precaution for the historic Category 1 storm, which is expected to cause billions of dollars in damage as it ploughs up the Northeast and Mid-Atlantic regions this afternoon and evening.

However, public emergency rooms at all hospitals will be open throughout the storm, Mayor Michael Bloomberg said in a press conference yesterday.

Also, while residents have been evacuated from low-lying Zone A areas most at risk from flooding, hospitals and nursing homes will stay open.

Still, Coney Island Hospital has transferred 40 mostly non-critical ventilator patients to other hospitals, and will only accept walk-in patients, not ambulances, during the storm, HHC said in an e-mailed statement to DOTmed News.

Most private hospitals seem to be following suit. New York University Langone Medical Center says on its website that it has postponed non-emergency procedures Monday and Tuesday. The NYU hospital was evacuated last year during Hurricane Irene.

So far two hospitals have been evacuated. The Veterans Affairs department said it cleared out its Manhattan campus on East 23rd Street. New York Downtown Hospital, several blocks east of the World Trade Center site in Lower Manhattan, has also been evacuated, according to a statement from the Mayor's office.

A VA spokeswoman told DOTmed News by e-mail that the Manhattan VA hospital evacuated 100 patients, in a process that took nearly eight hours.

An ABC News report said that while the Downtown hospital was not at risk of flooding, its directors were worried that it could lose power and it would have no way to refuel its 42-hour generators. Nearly 125 patients have been transferred, ABC News said, in a tricky operation that took some 15 hours.

Staten Island University Hospital, which was evacuated last year during Irene, said it was discharging non-acute care patients but was not fully evacuating.

Sandy, a Category 1 storm with sustained maximum winds at 90 miles an hour, is currently whipping up the East Coast. It's expected to make landfall in the Northeast this evening, and has already prompted ASTRO's 2012 annual meeting in Boston to close its Monday sessions early.