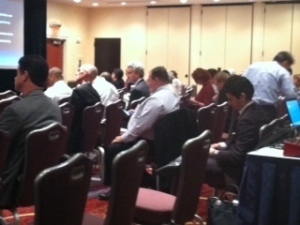 Attendees at NYMIIS 2012
Apple's much ballyhooed unveiling of the fifth edition of its iPhone put the tech world in a frenzy this week, but while radiologists might buy one to swap images with colleagues or even play Fruit Ninja, they probably won't make a habit out of reading X-rays off their phones, according to a medical informatics expert.

Mobile devices have a role as an occasional backup device for radiologists, but their small size likely prevents them from being used for routine primary diagnosis, Dr. David Hirschorn told attendees Monday at the New York Medical Imaging Informatics Symposium, which he helped organize.

Smarpthones and tablets equipped with medical image viewers are, however, better suited to non-diagnostic image sharing with referring doctors and their patients, he said.

"For every one (radiologist) use case, (there are) probably 10,000 use cases for the ordering clinician," he said during his talk, "A Tale of Two Displays: Desktop and Mobile for Medical Imaging," held at the Marriot Marquis in Times Square.

The primary drawback for mobile devices is how tiny their screens are, Hirschorn said, not necessarily their resolution.

Megapixel count is a popular point of marketing medical monitors, but for clinical utility, the size of the overall display and the size of the pixels in the display, which determines how far back you have to stand to see it clearly, are among the most important factors, explained Hirschorn, the director of radiology informatics at Staten Island University Hospital, which sponsored the event.

For routine primary diagnosis of CR images, for instance, you need a display at least 20 to 24 inches across diagonally. An iPad is 9.7 inches, he said, too small to safely let doctors render diagnoses for radiography.

"I don't care how many pixels you do or do not cram into my phone, I'm not gonna read a chest X-ray off it," he said.

But smaller pixel size images, such as from CT, MRI, ultrasound and angiography, might be appropriate to read, occasionally, on high-quality tablets. In fact, the Mobile MIM viewer, a medical imaging viewer for the iPad and other devices cleared by the Food and Drug Administration for diagnostic readings in 2011, and the first of its kind, is only approved for CT, MRI and nuclear medicine, and only when a workstation is unavailable.

Unlike in radiography, these modalities have much higher inherent contrast, Hirschorn said.

"If you're a radiologist you understand this. They're not eye tests."

Brightness is also a factor in displays, mobile or otherwise: if monitors are too dim, radiologists can miss subtle findings.
1(current)
2