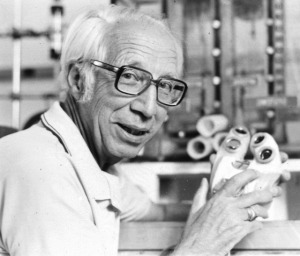 Photo courtesy of the University of Utah.
From the January/February issue of HealthCare Business News magazine

The month of February was when both the birth and death of Dr. Willem Johan Kolff occurred. Kolff was a Dutch-born physician who saved countless lives thanks to his invention of the first hemodialysis machine and his contribution to the development of the artificial heart. He is also credited with setting up Europe’s first blood bank.

Born on February 14, 1911 in the Netherlands, Kolff earned his medical degree from Leiden Medical School in 1938 and his Ph.D. from the University of Groningen in 1946. While practicing medicine in the Nazi-occupied country during World War II, he witnessed a young man suffering a slow and painful death caused by renal failure. This experience is what inspired him to build the first artificial kidney—also known as a hemodialysis machine—a device that is used to remove toxic waste from the blood while replenishing the body with clean blood.

“I knew exactly what I wanted to do,” Kolff said in a November 15, 1991 interview with the American Academy of Achievement. “I wanted to use dialysis to remove urea and other products that are excreted by the kidney. I filled a small piece of cellophane tubing, about 40 centimeters long, with blood. I added urea to it, I shook it up and down in a bath with saline, and from this I could calculate that I needed ten meters of this stuff, and that the blood had to be continuously in motion, and the dialyzing fluid also in motion. I also had Heparin to prevent clotting. All I had to do was to make a machine with sufficient surface area to make it worthwhile, and that’s what I did.”

Although his first several patients did not survive the procedure, by the middle of the 1940s Kolff had successfully saved the life of a kidney failure patient—a 67-year-old woman who had fallen into a coma—through the use of hemodialysis. At the time, his experimental invention was receiving a great deal of opposition from professionals in the medical community. “There were some that were receptive, there were many more that thought that the idea to have blood outside somebody’s body was a horrible idea, and they did whatever they could to prevent using the artificial kidney . . . some of them wrote articles that said the artificial kidney was not needed,” he said in the American Academy of Achievement interview.

Despite the criticism, Kolff’s hemodialysis machine went on to become an important life-saving device that meant the diagnosis of renal failure was no longer a definitive death sentence. Today hundreds of thousands of people undergo dialysis treatment each year in the United States.
1(current)
2