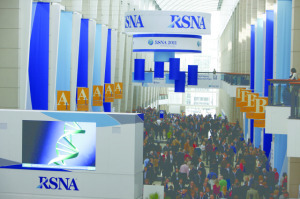 From the November 2011 issue of HealthCare Business News magazine

As has been the case for the last quarter century, the Radiological Society of North America’s 2011 meeting will be held at the McCormick Place convention center in Chicago, Ill. The 97th Scientific Assembly and Annual Meeting will take place from Sunday, Nov. 27 to Friday, Dec. 2.

According to Maureen Morley, RSNA’s assistant director of public information and media relations, as of late October, professional and guest registration for the meeting was up 7 percent from 2010. At that time, the society was expecting to have 671 exhibitors at the Technical Exhibition, another increase from last year’s meeting. Morley says the society anticipates that this year’s attendance will be equal to or greater than last year’s, which totaled 58,004.

What to expect
The prediction is that the 2011 meeting will unite professionals from over 100 different nations. There will be an estimated 3,000 scientific presentations and posters featuring the latest in radiological research, 20 scientific and exhibitor press conferences, and over 2,100 education and informatics exhibits.

RSNA received 12,474 abstract submissions this year, as compared to the 11,740 that were sent in 2010. Hot topic sessions will address developing trends in the areas of CT, PET, MR, radiography and interventional radiology. There will be more than 300 Refresher and Multisession Courses, which will encompass both traditional and innovative radiological topics.