This month in medical history: shame of a nation 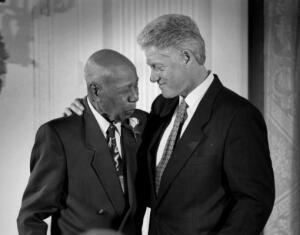 Nearly 40 years ago this month, on July 25, 1972, The Washington Star broke a story reported by Associated Press reporter, Jean Heller.

Heller's story uncovered the collusion between the Public Health System and the Tuskegee Institute to intentionally keep 399 black men infected with syphilis. The organizations conducted a study, starting in 1932, on the effects of the disease; following 600 men, 399 infected and 201 free of the disease. However, when the first major paper was published four years in, some criticism surfaced and critics questioned why there didn't seem to be any evidence of the men actually being treated for the disease.

The men had initially signed up for the study in exchange for free medical exams, meals and burial insurance. At first, the study was intended to last for six months and would treat the men for what was termed "bad blood," in the local vernacular. Instead, it continued for 40 years, only officially ceasing on Nov. 16, 1972, months after Heller's story hit.

The headline read, "Syphilis Patients Died Untreated," and the story was picked up and run on the front page of The New York Times the following day.

Peter Buxton, a venereal disease investigator working for the PHS, revealed the story to the press after his 1966 letter to the Centers for Disease Control, then in charge of the study, was dismissed with a response that declared the study would be run to completion. "Completion" meaning the death and autopsies of those suffering from the disease, even though by then penicillin had been discovered as a cure for syphilis.

By the time the study ended only 74 of the infected men were still alive. The number of deaths from the disease among the study subjects is still in question, with investigations and studies claiming anywhere from seven to 28 deaths with just a few to more than 100 dying from related complications. Additionally, some wives of the infected also acquired the disease and some babies were born with it as well.

The summer following the story, a class-action lawsuit was filed on behalf of the men involved in the study and their families. A $10 million out-of-court settlement was reached by the following year. In addition to the financial settlement, the claimants also received lifetime medical as well as burial services. In 1975, wives, widows and children were added to the program and 20 years later, in 1995, the program added health benefits.

Two years later, in 1997, President Bill Clinton would apologize to the men and their families. By then, only eight survivors remained. Ernest Hendon, the last study participant, died on Jan. 1, 2004. He was the final unknowing participant in the long-running study conducted by individuals that President Clinton said, "diminished the stature of man by abandoning the most basic ethical precepts. They forgot their pledge to heal and repair."

[Read an interview with Jean Heller about breaking this story]