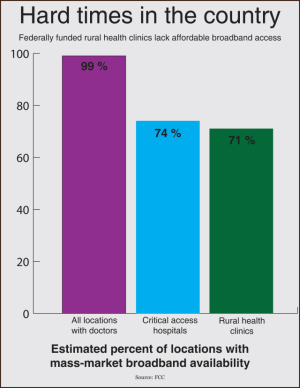 It likely comes as no surprise, but the United States does not produce many neurologists.

According to recent estimates, there are about four brain specialists for every 100,000 people in the country. This is a tragic statistic for overbearing mothers who want their children to be brain doctors. But the fallout is especially heavy for stroke victims in remote, rural areas, who often don’t have ready access to stroke specialists when they really need them.

Luckily, for these patients, video conferencing with a stroke specialist hundreds of miles away might help save their lives. A 2009 report in the journal Stroke concluded that video conferencing and remote sharing of brain scans with stroke and imaging experts could help doctors determine if someone suffering an ischemic stroke was eligible for a tissue plasminogen activator (tPA). This clot-busting drug can reduce disability following a stroke, but it must be given within three hours of the appearance of symptoms. And as it only works for some conditions and can actually worsen others, only a trained specialist can decide if it’s appropriate.

And treating stroke patients is just one of the frontiers of telemedicine.

Its supporters tout numerous benefits. They claim telemedicine can save the health care system money by monitoring chronically ill patients at home, and catching problems before they would lead to a hospitalization. MRI or CT scans can also be shared with radiologists across the country or around the world. And, as with stroke patients, people living in remote areas can get face time with experts via video chat.

But for some hospitals, the glorious future of telemedicine has a sticking-point: broadband access.

How big of a problem is hard to say. A report last year by the Federal Communications Commission found for some rural providers, it’s significant. About one-third of rural hospitals and one-quarter of critical access hospitals receiving federal funds lack access to affordable broadband.

As it is, some hospitals have to be crafty about using their limited bandwidth. Some hospitals wait until after-hours to upload MRI scans or other big files because they don’t have the capacity to do so during the day when other kinds of data are squeezing through their congested wires.

And wide bandwidth isn’t just needed for telemedicine. Soon, it could be required by health care providers eager to meet meaningful use requirements and qualify for financial incentives attached to them. Without affordable broadband access, later requirements, particularly those requiring hospitals to jack into health information exchanges and other bandwidth-hogging networks, could be tough to meet.
1(current)
2
3
4
5

Will pregnant patients administer their own ultrasound exams in the future?

Scanning on wheels — the benefits of mobile imaging