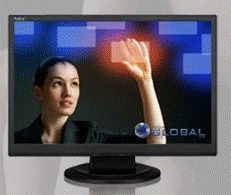 Touch screen technology
may be coming to
a workstation or patient
kiosk near you
Last month, Tech Global, Elgin, Ill. introduced its Tech-Privacy touch screen monitor used in government and industrial applications like health care settings. Under the nation's HIPAA law, hospitals, doctors' offices and clinics need to safeguard patient privacy. Meanwhile, the popularity of smartphones is a catalyst for adding touch screens to computer monitors.

"The touch screen market is starting to become a little more prevalent in health care in everything from regular PCs in nurses' stations all the way into OR monitoring stations. Everything is moving toward touch," said Patrick Naughton, senior account executive for health care at Tech Global. He noted that touch screen interfaces are cropping up for use with electronic medical records, including use by patients themselves.

With Tech-Privacy, only the person directly in front of the screen can see on-screen data. An application might include patient intake kiosks among many others. Tech-Privacy is an LCD monitor with integrated privacy controls as well as anti-microbial properties.

"Technology-wise we're not reinventing the wheel in terms of a privacy screen. You can get a cheap overlay and stick it on the face of your monitor. But that doesn't work in the medical world. You have to clean them. They get ruined pretty quickly. So we are integrating that privacy screen right in with our touch glass package that's going behind the bezel so it can be cleaned, and withstand heavy use," Naughton said.

"They appear as they originally did before they were touch-screen integrated. So we put the original manufacturer's bezel back on. We are an integration partner with these manufacturers with their blessing so when they have a need for a touch screen it comes to us," Naughton said.

Tech Global's touch screen monitors integrate a layer of capacitive material right into the glass. The material has a very low-level electrical current running through it.

"It can't electrocute you. It's minimal, low voltage like mobile phone technology," Byrd said. "When you touch that piece of glass it draws a current to that XY coordinate on screen because naturally as humans we have current running through us; so there's a voltage jump at that XY coordinate. A controller card in the back says 'hey I recognize something going on at the XY coordinate. I'm going to record a mouse click.' So it's a glorified mouse pointer," Byrd explained.

"The panel itself has an antimicrobial coating as well as privacy filter embedded in it. It actually kills the germs on your finger after you touch it. There is a coating on the touch screen that makes it safe for medical applications and the monitor can be sealed and wiped down with a chemical cleaner," Byrd said.

"For most of them the next iteration of their software will be touch capable. You can run any computer [or operating system] on a touch screen but you have to write your software a little bit differently," Naughton said.

Meanwhile, Tech Global is well positioned. "As far as I know, because of our controller and panel, we are the only medical glove touch-capable capacitive touch panel on the market," said Byrd.

The company also makes a touch-screen radiology viewing monitor and an LED touch screen (LED uses far less power than LCD) that may break into the medical market soon.