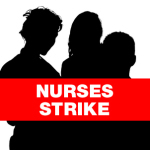 Walks slated for Minnesota
The Minnesota Nurses Association has authorized a work stoppage for more than 12,000 nurses in a one-day action Thursday.

Twin Cities Hospitals released a statement saying that it has offered reasonable proposals on wages, pensions and other areas "reflecting the realities of today's health care environment." The association noted, "The Twin Cities hospitals have among the best paid nurses in the country and the highest quality of health care in the country. The national nurse union agenda for California-style nurse staffing ratios does not work in California, and would not work in Minnesota. The Twin Cities Hospitals remain committed to delivering high quality of care for our patients, at an affordable and accessible level for the community."

Meanwhile, a temporary restraining order was issued Tuesday in San Francisco County Superior Court, effectively halting the planned strike by University of California nurses, according to the Los Angeles Times. The injunction holds that the strike may be unlawful since public workers may not strike. More than 12,000 California registered nurses were scheduled to strike for 24 hours on June 10, most of them at University of California hospitals, the California Nurses Association/National Nurses United said. Some private hospital nurses were also planning a job action and the restraining order does not prevent walk outs at those three non-UC hospitals in Los Angeles County, including Citrus Valley Medical Center, Covina; Little Company of Mary Medical Center, San Pedro; and Marina del Rey Medical Center.