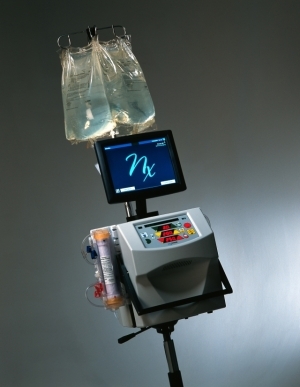 The life-extending treatment of renal disease by hemodialysis has remained much the same in recent years, but the dialysis industry is gearing up for significant changes in the near future. As is the case with many other sectors, dialysis services are not being spared from CMS cuts in reimbursement and that will continue to be a challenge for dialysis providers across the nation. However, a few new products may arrive next year that will garner the attention of dialysis providers looking to take their work home or become "enlightened" about how to improve the effectiveness of the treatment.

According to the Medicare Payment Advisory Commission (MedPAC), there are about 4,960 dialysis providers in the US, a three percent increase from 2003. Yet, two major national chains - Fresenius and DaVita - command 70 percent of all freestanding dialysis facilities. Fresenius is also a manufacturer of dialyzers, with Gambor, Baxter and B. Braun Medical other suppliers of note. Despite the economy, these manufacturers are showing improvements in revenues and net sales. DaVita's earnings went up by 11 percent in 2008 and Fresenius saw $10.6 billion in net revenue in 2008, up from $9.7 billion the prior year.

In the courtroom, Fresenius Medical recently accused Baxter of patent infringement involving a Baxter hemodialysis system integrated with a touch-screen user interface, but the district court ruled in early September that Fresenius had failed to provide substantial evidence that there was infringement. Fresenius could not be reached for comment.

It has been a sleeper trend the past couple of years, but home hemodialysis is finally getting the attention new research says it deserves. The manufacture of increasingly smaller and more mobile dialysis machines are making home dialysis more feasible for renal patients.

Dr. Leslie Spry is a spokesperson for the National Kidney Foundation and is also a nephrologist at the Dialysis Center of Lincoln, a non-profit dialysis practice located in Lincoln, Neb. He's been in kidney medicine for 30 years and is a long-time proponent of home treatments. About 50 of his 450 patients receive treatment at home, many of them using a NxStage System One home dialysis system.

"We've been champions about trying to get more people at home, but it's also because we live in a rural state and we can't build a dialysis unit on every street corner," he says.
1(current)
2
3
4
5