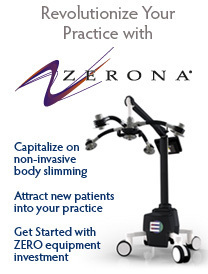 The Zerona laser
for non-invasive body shaping
was one technology
featured at this week's conference
New York City -- DOTmed News checked out to the Medical Aesthetics Conference and Exposition, held Sept 15-16 at the Jacob K. Javits Convention Center in Manhattan. The exhibition is the premier event for the business of medical aesthetics, "medi spas" and minimally invasive cosmetic procedures. The meeting was organized in tandem with the Spa and Resort Expo and the HBA Global Expo, the personal care and cosmetic industry's largest product development event. Jointly, the expositions offered more than 900 exhibitors and educational partners and hundreds of new products.

Just beyond the Javits Center's "Crystal Palace" the exhibit hall was lined with booths representing companies that offer cosmetic lasers, aesthetic imaging systems, skin resurfacing devices and tooth whitening lamps, whether brand new or already dominating the market. DOTmed spoke with a number of medical aesthetics associates to get an idea of how today's industry is faring.

Since the economy took a nosedive and needs a facelift of its own, a few trends have emerged to help ease what industry experts are characterizing a "rough" market. Increasingly companies are offering profit-sharing programs for cosmetic surgery practices and medical spas, which means manufacturers retain ownership of the equipment and clinicians pay the manufacturer for a certain number of patient procedures. This allows clinicians to turn a profit without having to be responsible for the equipment's entire price tag.

Santa Barbara Medical Innovations (SBMI) presented the Zerona non-invasive cosmetic laser, which produces results similar to liposuction without invasive surgery by using a system that employs five laser heads, each using 635 nanometer low-level diode laser technology, to "emulsify" fat tissue. SBMI asserts that in double-blind, controlled studies, Zerona treatments resulted in an average 3.64-inch loss in circumference around the waist, hips and thighs. Collapsed adipose cells secrete triglycerides and fatty acids, which are then eliminated by the body. A single treatment can cost $2,500 and a laser $80,000.

"No one wants to spend $80,000 on a laser these days," said Jack Farley, SBMI consultant. In the larger scheme of the medical aesthetics industry, Farley says it's been pretty grim. "We're about 25 percent down this year. There are doctors who can't pay their rent."

Cosmetic Laser Group regional manager John Haeberlen said even the used laser market is tight, but slightly better in recent months. "The market was down a lot a year past, but it's been steady this year."
1(current)
2
3