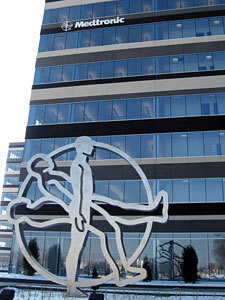 Medtronic
A Senate proposal to charge medical device makers $4 billion annually to help pay for health reform has "a double impact" on the medical device industry, as it is already smarting from cuts in hospital funding, Medtronic chief financial officer, Gary Ellis, told investors at the Morgan Stanley Health Care Conference in New York this week.

Medical device manufacturers are reimbursed by hospitals and hospitals have said they plan to reduce overall payback levels.

"We do believe there is a problem with the overall committee's recommendation," Ellis said, echoing the medtech industry's official stance. The proposal was part of a health care overhaul plan, devised by Senator Max Baucus (D-Mont.), chairman of the Senate Finance Committee.

Medical device makers are mobilizing to fight the measure that would begin next year. AdvaMed President Stephen Ubl has said industry would "vigorously oppose the plan."