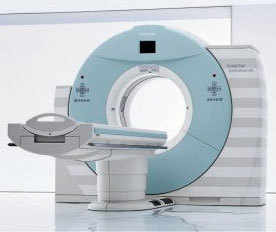 The Siemens SOMATOM
Definition AS CT is
one of the top-of-the-
line image-guided
radiation scanners
Moderately to severely obese prostate cancer patients have superior outcomes when treated with top-of-the-line image-guided radiation scanners, rather than with traditional external beam radiation--or even with image-guided scanners that do not provide clear images, says Dr. James Wong, chairman of the oncology department at Morristown Memorial Hospital in Morristown, NJ.

This is because top-of-the-line scanners can easily correct for the daily movements of the prostate gland, he tells DOTmed News. These prostate movements are especially pronounced in obese individuals, since the skin overlying their lower abdomen "moves around easily" from day to day and is not always stationary when they lie down for radiation, Dr. Wong says.

There are many types of image-guided machines, such as ultrasound or X-ray machines, used at cancer centers around the country, he says. With image guidance, doctors are able to compare the earlier images with those taken before each treatment session to adjust the dose if necessary.

"But the top of the line machines that use a real diagnostic CT scanner in the treatment room, such as the ones manufactured by Siemens and Varian, are only used at about 10 cancer centers in the U.S.," he tells DOTmed.

The machines are not practical for some hospitals because the set up requiring real diagnostic in-room CT scanners does not fit into conventional radiation treatment rooms, he says.

"To use these machines, the treatment room and the linear accelerator have to be completely reconfigured. This is not an easy task, especially in view of the current health care economic environment," Dr. Wong says. Just as important, most hospitals don't have top-of-the-line, state-of-the-art equipment since it's still prohibitively expensive.

"If it were my relative's prostate gland being irradiated, I'd want him to have the best image-guided radiation therapy available," he says.

Dr. Wong recalls that more than a decade ago, he and his colleague, Dr. Minoru Uematsu, who practices in Japan, began asking themselves whether their radiation beam was hitting the target correctly. These questions lead them to approach Siemens, which agreed to manufacture the first "CT-on-rails in-room CT" for image guidance.
1(current)
2