Telford manages seven-and-a-half full-time staff, with administrative support supplied through IT. His team’s day to day primarily revolves around making sure the organization’s medical equipment and healthcare technology is up and running, ready to serve patients. He also takes projects to integrate certain technologies with other technologies and spends a significant chunk of time evaluating risks around patient safety, working to minimize or eliminate those risks.

To keep the workflow flowing, the team uses a computerized maintenance management system. “We use it to track most of our projects, whether scheduled or unscheduled, our corrective maintenance, and those programs we get involved with when we assist other departments on multidisciplinary teams,” he says.

Most of that work is done using a dashboard feature to provide clear visibility on where projects sit. Telford says the organization is also rolling out a capacity management system soon that will help him and his team deliver better predictions regarding the bandwidth they have available to take on additional projects.

The team manages a robust menu of equipment. Telford says it’s a fairly short list for what’s outsourced. “It’s high-end imaging modalities because of the nature of the modality or because it’s a unique system,” he says. “So we outsource our MRs currently, although that’s under review. We outsource our nuclear medicine system, a unique system we’re installing later this month, which would be the first in the state of Nebraska. We also outsource a few of our lab devices primarily because of the contractual agreements we’ve developed. Lastly, in surgery we outsource a few higher-end devices, where there may not be a very good solution to training my staff or bringing in a third-party.”

The in-house work is accomplished even in the face of the reduction of manuals and other documentation from many vendors, which according to Telford, have become increasingly harder to obtain, even in pre-purchase agreements.

Telford says the primary decision about whether to add new equipment to the in-house maintenance list rests primarily on the expertise already held by his team and the prospects of educating them if more knowledge is needed, “So if there’s not a technical school available, that’s a very limiting factor,” he says.

That’s not to say that every troubleshooting challenge needs a high-tech solution, or even a lot of time to dissect the issue. “I’ve been in the field long enough that I’m less surprised when I see simple fixes overlooked. I think we still, as an industry, tend to get into the weeds and look for complex problems, when it might be solved by something as simple as blowing out the PC and cleaning it out versus re-ghosting a system,” he says. 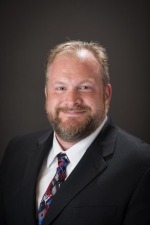 Dustin Telford
The ability to not lean so heavily on deep expertise that you overlook a fairly mundane solution could be a desirable quality in a team member, but Telford has a few other traits he looks for as well. “I can tell you it’s easy to find someone that has good technical skills, maybe not in the biomedical field. It’s also easy to find people who can provide very good customer service, but we look for both. When we go through the interview process, we not only look to confirm someone can do the job due to knowledge they already have or with the right amount of onboarding and training, but we also look at how well they will do that job when they interface with clinical staff, visitors, and our patients. For example, if I ever heard someone in an interview say they didn’t like kids, that’d be a red-flag, since that’s who we have as patients.”

Telford says prospects go through a team interview which enables him to get feedback from others and provides additional insight. “I hope the team is very candid about what they like, and allow the person to understand what they’re getting into. It’s one thing to talk about culture, it’s another thing to hear from a large group instead of only the hiring manager about what that culture means.”

According to Telford, the culture at Children’s is supportive, but that doesn’t mean his wish list is blank. For instance, more time to evaluate equipment purchase decisions would be welcome. Currently, that review time typically runs two to six weeks for simpler technology, whereas a new CT could take several months. To help make the most of the time, he says his team tries to get ahead through attending conferences, reading the literature and engaging vendors before something is even brought to them for review. “I think the number one thing that would help my job and everyone else’s would be better collaboration with the hospital systems, manufacturers and third-parties,” he says.