Cath labs today can be used to perform procedures that are difficult or not at all possible in the OR.

by John R. Fischer, Senior Reporter
By circumventing anatomic barriers, today’s cardiologists are getting to the heart of the issue less invasively than ever before.

It wasn’t so long ago when patients with ventricular septal defects had no choice but to undergo sternotomies. The invasive procedure was carried out with a vertical incision made down the sternum so it could be “cracked” open for the physician to find and close the defect, recalls Dr. J. Jeffrey Marshall. Treatments for this condition, as well as other structural heart diseases, have come a long way since then.

“They can all be done by arteriotomy, usually from femoral access but they can be done from the axillary artery too,” Marshall, chief of the Northside Hospital Cardiovascular Institute and a board member of the Accreditation for Cardiovascular Excellence (ACE), told HCB News. “They can be done transcavally. You start in the vein and end up in the aorta. People have done things transcarotid. There are all kinds of different access points for those structural heart disease procedures.”

Due to the reduced invasiveness of these procedures, many of them are no longer performed in the OR but can be done in smaller cardiac catheterization labs. This shift has prompted clinicians to re-evaluate the role of the lab, and implement new guidelines and equipment to accommodate its operational needs and ensure the safety of patients and staff inside it.

A new role
Cardiac cath labs were primarily diagnostic 30-40 years ago and not designed to treat patients. Today’s labs are still the site of diagnostic exams, but also are where procedures for valvular and structural heart diseases take place, says Dr. Khaldoon “Kal” Alaswad, director of the cardiac catheterization laboratory at Henry Ford Hospital.

“Valvular heart disease management became possible in the cath lab with TAVR (transcatheter aortic valve replacement) for severe aortic valvular stenosis, even in patients with surgical risk,” he said. “Innovation in the management of mitral valvular disease is also moving from the OR to the cath lab. For instance, the treatment of mitral valve regurgitation with the mitral valve clip was recently approved, and complex mitral valvular stenosis can be treated with a transcatheter valve.”

Other cardiac-related diseases that can be addressed in the cath lab include complex peripheral artery and venous diseases; pulmonary embolism; hemodynamic support; and coronary artery disease. Chronic total occlusion is another one, with the success rate for CTO percutaneous coronary intervention (PCI) rising from 60 percent to about 90 percent, and complication rates less than seven percent.

Many require a team of diverse talents, such as a heart team to perform TAVR. This can consist of cardiac surgeons, interventional cardiologists, cardiac imaging specialists, noninvasive cardiologists, and radiologists, among others. Experts agree that the best way of managing a cath lab and the diverse needs of clinicians and staff in there is to have a leadership team in place that is physician-managed.

“I have always found better decisions are made if you keep the patient as the focus and make the decisions for best possible clinical outcomes for the patient,” said Dr. Ehtisham Mahmud, professor and division chief of cardiovascular medicine at the University of California, San Diego, and president of the Society for Cardiovascular Angiography and Interventions (SCAI). “If the decisions regarding equipment or operations of a cath lab or healthcare delivery are made by a leadership team that is physician led, it almost always is better than one where financial decisions are made by administration alone or by non-clinicians.”

“When you’re doing any type of revascularization or cardiac procedure, whether it’s CABG versus PCI or SAVR versus TAVR, there has to be a team approach. That never developed in most places in the carotid arena,” said Marshall. “It’s sad that it did not occur because there is clinical equipoise between carotid aortic atherectomy and carotid stenting.”

The lack of a team contributes to the inability at times to perform certain procedures such as carotid stenting, which is underutilized in the U.S., according to Marshall. He partially attributes this underutilization to National Coverage Determination not demanding a carotid team. In contrast, the National Coverage Determination for TAVR required that there be a heart team.

“The thing that’s different between the carotid environment and structural heart disease environment is that in the carotid one, you’re talking about a single operator,” says Bonnie Weiner, chief medical officer for ACE. “What it came down to, in terms of the difficulty, were turf wars. For structural heart disease, in addition to the evaluation of patients in heart team environments — at least in the early stages — there have been surgeons side-by-side with interventional cardiologists actually doing the procedures.”

Reducing radiation exposure
In the cath lab, the risk of radiation exposure is amplified due to the small size of the room, and the increased scope of the disease that can be managed in it. Weiner says the complexity of procedures being performed is another key factor.

“For chronic total occlusion treated with PCI, they’re frequently involved, complicated procedures that require more radiation and exposure than a normal PCI,” she says. “I think that has to be borne in mind as we do more complicated procedures. There is a downside for the operator and the patient. As part of the accreditation process, we do look at that and at what percentage of cases and operators are getting higher radiation doses.” 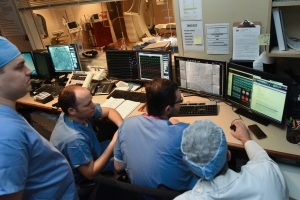 Initially used for performing diagnostic exams, cath labs today are the sites of procedures to address vascular and structural heart diseases, such as TAVR, among other cardiac conditions.
Advancements in room design, such as improved lead shielding, are helping to mitigate some of those concerns. Other innovations, such as imaging equipment that uses pulsatility fluoroscopy (as opposed to continuous radiation) and intravascular ultrasound (which can measure size and length of blockages without radiation) are also combating some of those exposure concerns, according to Alaswad. Zero Gravity suspended aprons are another way to protect interventional cardiologists at increased risk of musculoskeletal hazards in the cath lab, while also reducing the weight burden of a conventional lead apron.

The emergence of robotic procedures is also poised to reduce these risks, according to Mahmud. “One can be in the control room and be the operator performing the procedure,” he said. “You can sit in the cockpit and control guide wires and stents, and do coronary stenting, being exposed to minimal radiation.”

What the future holds
The role of the cath lab is expected to continuing evolving, with research such as the Ischemia trial — designed to determine the best approach for managing higher-risk patients with stable ischemic heart disease — changing the types of procedures that commonly take place in the cath lab.

“It will no longer be necessary to perform diagnostic angiograms after the Ischemia trial,” said Alaswad. “Advances in CT and MR imaging will provide platforms for diagnostic procedures and interventional procedure planning and execution. Co-registration between CT and cath lab imaging is continuously improving to make complex procedures more successful and safer.”

He also expects overall cost of the procedure to decrease, due to CMS allowing cath labs to be stand-alone in ambulatory surgical settings, rather than just in hospitals. The protocol goes into effect in 2020.

“Hopefully we can also make PCI more easily available. In most major metropolitan areas, it’s not an issue, as most hospitals have cath labs and interventional programs,” he said. “Maybe in communities that are somewhat underserved it’s possible to make interventional care more available at a lower cost.”