by Sean Ruck, Contributing Editor
HealthCare Business News spoke with Richard Fleury, vice president of the Department of Radiology and Imaging and Dr. John Carrino, vice chairman of Radiology and Imaging for Hospital for Special Surgery (HSS) gave a presentation during AHRA 2019 about reimbursement and what radiologists can do to effectively navigate a world where value-based payment systems are the current rule of the day. 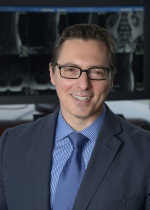 Dr. John Carrino
To move through the value-based world, Carrino and Fleury feel it’s imperative that radiologists interact more with their referring providers. This, in part, means discussions about appropriate utilization and providing a mechanism for that utilization through an order entry or ordering system.

The drive to improve the visibility, and by extension, support the value of radiologists is reflected in the ACR’s Imaging 3.0 initiative. Imaging 3.0 is a narrative to not just get radiologists a place at the table when it comes to deciding which tools and processes will be used going forward, but strives to show they should be a driving force in those decisions.

According to Fleury, HSS has encouraged and supported increased visibility of radiologists and their interaction with their referring physicians for a long time. The interaction goes beyond the calls or messaging to discuss findings. “It’s interacting with them in their interdisciplinary conferences and participating in those conferences as a member of the team. Those engagements help foster a better understanding of the enormous amount of value of radiology in general,” he says.

Richard Fleury
For now, engagement in professional societies and committees is how radiologists will best be able to tout the value of the field, as well as where they’ll hone their skills in expressing the value. According to Fleury, that may change some day. “What I’ve heard out there, is that radiology leadership is trying to get the message across to the radiologists to have them start engaging medical students earlier in their training. Don’t wait for them to be third-year residents or for them to choose to go into radiology before that interaction. Engage medical students with the importance that radiology brings to the table early and in that way, they’ll demand that or see that value as they get into their medical careers. That will ultimately improve patient care.”
Teleradiology also has its part in the discussion. Although it’s not known for face-to-face interactions, there are still the periodic multidisciplinary conferences and increasing opportunities for virtual collaboration — PACS-supported Skype conferencing for instance.

One aspect of value messaging radiologists have little control over is the reimbursement model. Obviously organizations like ACR and AHRA can help steer some legislative discussions, but they’re pulling on the tiller of a cruise ship. For HSS, a specialty hospital focused on orthopedics, rheumatology and musculoskeletal disease, that’s unfortunate according to Fleury. That’s because a lot of the quality measures when the Medicare Access and CHIP Reauthorization Act (MACRA) were introduced and tweaks that were made to the Merit Based Incentive Payments System (MIPS), weren’t applicable to HSS’ focuses.

“I can’t speak for other groups, but I would think they’re also using similar terms like ‘surrogates to quality’ because we’re all trying to do things like reduce dose to patients and infection rates in procedure-based services. But really, your true quality outcome measures are not being captured, I think because a lot of people are having a hard time defining them. You may be collecting smoking status on patients and infection control best-practices for patients, and striving to reduce radiation dose as much as possible, but in the end, does it really deliver better quality of care?” he says.

Carrino believes physicians need a bigger voice in explaining what defines healthcare quality. But at the same time, as those discussions occur, if people want higher quality, the value to cost equation will tilt further.

As patients pair their growing savvy at navigating the internet with an increasing understanding about their own health care, they’ll ultimately make the decision for transparency related to value and cost. Before that time comes, Fleury says it’s important to be very clear on the value side or benefit side of those costs. “So in that way, the patients can get the full story — they may be paying more for services. Are they getting more? Are they getting better quality? Organizations are really going to have to have that message down very well.”