Dr. Eliot Siegel says he hopes to see local
worklists in the next five years that will enable
radiologists to share images and reports with
clinicians in outside networks.

by John R. Fischer, Senior Reporter
Dr. Eliot Siegel is surprised. More than 25 years ago, the Maryland-based radiologist could envision sharing images with not just other departments in his own network but with ones outside of it, in networks belonging to different providers and across vast geographies. He expected it to be the norm.

Online access to imaging exams have also led to more patients seeking direct meetings with their diagnosing radiologist, shifting the traditional role of the radiologist from someone who just reads images to one who is responsible for both reading and relaying findings. The extension of this role comes with the need to understand what should and should not be told to the patient, and how best to relay information.

“What a radiologist doesn’t want to do is tell a patient they have a herniatiation of their esophagus. The doctor taking care of them knows that’s not the reason for their pain, but in telling the patient that, you just opened a whole new can of worms,” said Dr. Samir Shah, a radiologist and VP of clinical operations at Radiology Partners. “Radiologists themselves have always been considered the doctor’s doctor, not the doctor for the patient.”

Extending interoperability to outside networks
Modern radiology is a data aggregation business, enhanced by information pulled from EHRs about an individual patient. Consisting of demographics and population data, the facts drawn from these records can change how clinicians interpret images and determine if follow-up procedures are necessary or not.

“Patients don’t obey those arbitrary professional boundaries of ‘one group reach for this hospital and another reach for that hospital,’” said Dr. Kurt Schoppe, chair of quality and board member for Radiology Associates of North Texas. “Avoiding the isolation of that data across those artificial professional boundaries allows us to make better decisions and provide a more valuable product to the patient. But it takes time to break those boundaries down.”

Some barriers are cultural or behavioral in nature, due to decades of storing and accessing data in separate silos. To Shah, the main problem arises from providers’ perceptions of one another.

“More hospitals consider themselves as competitors in the healthcare marketplace and are engaged in a land war to get as much territory as possible and make more money than their competitor systems,” he said. “Just because two hospitals are competing against each other in the same city, however, doesn’t mean the patient should have to suffer if some of their images are at one institution and some are at another.”

Other barriers revolve around the technology, such as data security. Rising hackings and ransomware attacks have made providers resistant to sharing data, fearing such attacks and the consequences of them, which can include steep monetary penalties and damage to an institution’s reputation.

Another is incompatible format exchange, in which the software system for one provider relays information in a format different from that of another. To communicate successfully, providers may be required to buy software that will enable one system to talk to the other.

“If the data’s a mess, and one computer expects the information in one format and the other is delivering it in another, you’ve completely impaired your ability to move to the next level of offering a service or achieving the goals that you set out for,” said Schoppe.

Telemedicine and AI integration
The amount of data available today, while helpful, is difficult to manage, with providers spending hours sifting through excess information for the most relevant details for their readings and interpretations.

There is much optimism that the introduction of AI applications and algorithms will help relieve this burden by acting as helpful assistants that extract and synthesize information from EHRs, and prioritize images in arrangements based on the preferences of the radiologists and urgency of the cases. 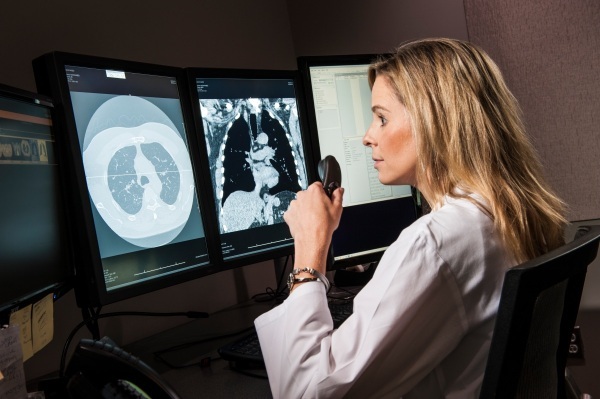 “Radiologists are certainly thinking about AI and how it may enhance our workflow,” said Dr. Margaret Fleming, a radiologist at the practice, Quantum Radiology in Georgia. “For instance, can an AI algorithm help sort a worklist such that patients with the most critical findings are sorted to the top?”

This use of AI aims to reduce repetitive steps that radiologists must complete at workstations to allow them to spend more time interpreting findings, and take into account patient history and priors to come up with accurate diagnoses and prescribe the best treatments possible. It also ensures they spend more time with patients.

But AI alone cannot fully manage the increasing number and complexity of imaging studies. The growing amount underscores the need for a greater number of radiologists, who currently are facing a shortage in their profession. This especially becomes noticeable when patients require a subspecialist or sub-subspecialist that is not available where they live. As a result, more radiologists are employing teleradiology. In fact, radiologists ranked highest by the American Medical Association for using telemedicine to facilitate patient interactions.

“The technology allows radiologists to do their jobs from just about anywhere beyond the confines of the four walls of the hospital,” said Shah. “Our teleradiologists do final interpretations now, not just wet reads, from the U.S., and work their shifts overnight from home. This has allowed imaging to increase overnight more and more.”

Getting your money’s worth
Teleradiology faces its own hurdles, the biggest of which is the lack of a reimbursement code, according to Shah, who says it deters radiologists, as they are motivated more to do things they will be paid for.

“Teleradiology may have contributed to governmental agencies driving down reimbursement in some respects,” he said. “Radiologists started to do more and more volumes in the teleradiology setting, and the effect has translated to the non-teleradiology setting where radiologists are also reading faster. There has to be a limit, because you need to spend a certain amount of time reading films, especially ones of complex cases, in order to be reimbursed fairly.”

The same can be said for AI. “AI can be done in so many different ways that we would run out of CPT codes before we have all the different software packages of algorithms there,” said Schoppe. “What is going to happen, in my opinion, is that we will get paid for it in the same way that voice recognition software gets paid for, usually on a per-fee basis.”

Reimbursement in general is a challenge for radiologists, due to the shift in healthcare from fee-for-service to value-based care and the bundling of relative value units for services. As a result, many practices have resorted to consolidating with one another to pool together their resources. While some proposals for alternative care models have been discussed to provide the same services at lower costs, many are cautious about bringing them to the attention of policy makers.

“Any alternative payment model requires a very detailed and granular understanding of the nuances of the specialty,” said Schoppe, who also chairs the reimbursement committee for the American College of Radiology. “When you get non-clinical people now editing a model, it runs the risk of being illogical or disadvantageous for the patients or the physicians.”

But efforts are underway to address all these issues facing the radiology community, with radiology leadership employing programs and training to help radiologists focus on more enterprise level issues that affect patients and providers themselves such as patient satisfaction, value-based care, and utilization management.

“The radiology group that has the best patient-centric technology and culture is going to succeed. That means treating the patient well,” said Shah. “Patients are going to access their reports. They have to be treated as a consumer with choices, because they will have choices. They are going to want to be empowered, to know their radiological findings are on the report, and what they mean for their health.”

Achieving this requires a combination of technological solutions and a fundamental change in the culture and communication patterns between radiologists and referring healthcare providers. Siegel, who is currently chair of the image exchange committee of CRISP, a regional health information exchange that includes hospitals in the Chesapeake Bay Area, sees such interoperability emerging rapidly over the next decade.

“Within the next five years we would very much like to see the ability to have a local worklist that not only includes local and network examinations but also exams performed throughout the entire region as well,” said Siegel. “I think that level of transparency and availability of images will fundamentally change the way we think about historical imaging studies and reports and other relevant patient information, where it wouldn’t matter what network system a study was performed in, because the images will be available everywhere. This is the ultimate extension of our original goal with the world’s first filmless department to be able to access any image, anywhere, at any time needed for patient care."