It’s difficult for even the healthiest patients to lie perfectly still in an MR machine for an hour. But for some patient populations, such as children, those with cognitive impairments or individuals suffering from the tremors that come with Parkinson’s disease, it’s practically impossible.

Using more than $2.1 million in funding from the National Institute of Neurological Disorders and Stroke, I’m leading a team of University of Arizona researchers in developing faster MR technologies to accommodate challenging patient populations. Scan times will be reduced from about 40 minutes or an hour to around 15 minutes or shorter, depending on a patient’s condition.

This challenge is not easily addressed by simply tweaking conventional MR protocols. Our research aims to provide higher-resolution images with richer information, giving health care practitioners more information about the stage of a disease. These methods may even be able to detect brain signal abnormality before a disease like Parkinson’s is diagnosed.

The pre-motor stages of Parkinson’s, which can include rapid eye movement sleep behavior disorder and hyposmia, or a reduced sense of smell, often begin setting in 10 to 15 years before the disease is diagnosed. Dopamine deficiency is the cause of most Parkinson’s symptoms, and by the time of diagnosis, 60 to 70 percent of dopamine-releasing neurons are already damaged, so treatment options are limited. With earlier detection, we may be able to delay the disease’s progress.

Taking MUSE one step further
The technique builds upon the multiplexed sensitivity encoded, or MUSE, MR I invented when working at Duke University from 2007 to 2016. MUSE improved upon traditional diffusion-weighted MR scan methods, which had voxels, or 3D pixels, that were too large to allow us to see certain subregions of the brain. After moving to the University of Arizona College of Engineering in 2016, I expanded my research, including learning how to translate MR technologies to study neurological diseases.

One of the main challenges in translating these technologies to a patient population is that they must address several limitations of existing technology at once, including limited resolution, susceptibility to motion artifact and the length of scan time. Our interdisciplinary work has been facilitated by my membership in the UA BIO5 Institute, a platform uniting researchers working in agriculture, engineering, medicine, pharmacy and science to find solutions to biology-based challenges, including the treatment of diseases.

The new enhancement of MUSE technology advances the imaging modality in three key areas. First, it reduces motion artifact, or inconsistencies created in an image when the subject of a scan moves. Second, enhanced MUSE will also be able to integrate multiple types of MR data, such as information on iron levels, gray matter volume and white matter connectivity. The goal is to combine these data in a coherent way so that we can produce high-resolution, motion artifact-free and multicontrast data in 15 minutes, rather than an hour. Third, obtaining such high-resolution images can come with a cost of higher noise level. To address this, enhanced MUSE includes a “denoising” process, which can reduce noise-related errors by up to 90%.

Another trade-off for these accelerated MR data is that they can become geometrically warped due to the scanning pattern used by the equipment. This is problematic because doctors often advise treatments — including surgery, intervention and deep brain stimulus — based on these scans, so precision is key. We’ve found a way to account for that as well: By alternating between scans that move from the top down and scans that move from the bottom up of the raw data collection, the distortions essentially cancel each another out with appropriate post-processing.

The result of all of this? A high-resolution and fast image that’s free from motion-related blur and geometric distortion.

A timeline for progress
In Phase 1 of our five-year project, we will test our methods, including the faster scan speed and the motion correction module, on healthy patient populations to make sure they work successfully and coherently. Then, we plan to acquire MR data from challenging patient populations — including patients at high risk for Parkinson’s disease and in both early and late stages of the disease — and compare their scans to those of healthy patients. We will also view the progression of the disease through a longitudinal study of high-risk patients in years two and five. 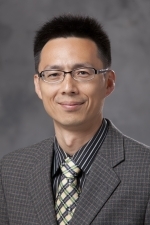 Nan-kuei Chen
Ultimately, we intend for these techniques developed in this work to be useful in the diagnosis, treatment, and treatment evaluation of many other disorders, including both neurological disorders, such as Alzheimer’s and cerebral palsy, and non-neurological conditions, such as those related to the heart or the intestinal tract. Faster MR can not only make clinical diagnosis more efficient, but may also make it possible to better resolve the dynamic processes of human physiology.

About the author: Nan-kuei Chen is an associate professor of biomedical engineering and member of the BIO5 Institute at the University of Arizona.