by John W. Mitchell, Senior Correspondent
Having grown up in a town of population 1,600 in South Dakota, Todd C. Lane, director of imaging services at Pioneers Memorial Healthcare District in Brawley, California, has a unique perspective about providing mobile PET services in a rural community.

Early in his career he not only served as a tech in mobile imaging units, but he also drove the truck. These days, he is steering the business from beyond the driver’s seat, navigating an evolving imaging marketplace to achieve operational improvements and a better business model for delivering mobile PET.

Brawley, is a small agricultural town in the Imperial Valley not far from the Mexican border. The town is served by 107-bed Pioneers Memorial Healthcare District Hospital with a 16-bed ER that is “overrun nonstop," according to Lane, predominantly with Medicare and Medicaid patients. The facility performs 90,000 imaging studies a year, which keeps five full-time radiologists busy providing a wide array of imaging services, including interventional radiology.

Lane has been at the hospital near continuously since 1986. He started as a CT technologist and also performed special procedures, eventually transitioning to PACS administrator, and onward to chief imaging technologist. He is now serving his second stint as director of the imaging department.

The hospital began its mobile PET services about seven years ago to provide better care to local cancer patients. Pioneers’ Cancer Institute sees patients Monday through Thursday for cancer staging and chemo treatments. That course of treatment then leads to about four to eight patients every Friday for PET scans. Before bringing mobile PET to its campus, oncology patients had to make a 100-mile drive to either get their imaging in San Diego or Palm Springs.

“Mobile PET saves our cancer patients from having to go great distances when they don’t feel well, and having to incur the expense of a hotel room,” said Lane. “We are also working toward offering prostate and brain metabolic studies.”

The community has a higher than average cancer rate, according to Lane. He speculated this was due to chemicals associated with the regional agriculture industry and poor air quality that blows north over the border from Mexicali, a large urban center of over 1 million people. Because Brawley is below sea level, smog can build up, depending on weather conditions.

This past November, in a decision to improve operating efficiencies, Lane switched mobile PET services to a different vendor, DMS Health Technologies. He said he made the switch to get access to more boots-on-the ground marketing support and to take over the billing for PET services.

"There wasn't anything wrong with our first long-time provider," said Lane. “But we have progressed to the point where we need to adapt the business model to serve our operational and clinical needs better."

The mobile PET unit arrives on Thursday night in time to set up for Pioneer’s Friday scanning, after which it is withdrawn and moved on to the next site. Lane said the hospital went with a mobile solution because of both the lack of space and the overall cost of a fixed unit — about $2.5 million, he said. Also, there hasn’t been enough volume to justify an on-site unit.

With the new provider, they switch from a pass-through billing model to a fee-per-scan business arrangement. The hospital now handles the authorization and the scheduling through the vendor web portal, paying the PET vendor a fee per scan and then billing the patients in accordance with CMS guidelines.

“It’s not that we’re clearing very much money, but it’s more than before,” explained Lane. “We had just been doing it as a service to the community.”

He said they used to perform PET scans on patients every other Friday, but with the enhanced support from its new vendor, the hospital has ramped up to weekly operations.

The mobile unit travels about 200 miles from Los Angeles every week and, according to Lane, the only site requirements for utilizing mobile PET services are a parking space convenient to the hospital, a 480v electrical hook-up, a phone line and network connectivity to send images to the PACS system. Unlike in his early career, when he started out driving mobile imaging units in South Dakota and Minnesota, professional drivers move the rig — not the techs. 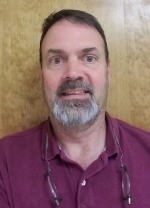 Todd C. Lane
Imaging agents for the PET studies are delivered by a radiopharmaceutical vendor from San Diego, with doses calibrated to account for the 100-mile travel time. There is a 4,000-foot pass between Brawley and San Diego that can get inclement weather at times. This past winter they did have to cancel PET scans when the radiopharmaceutical delivery could not make it over the pass due to snow. But, Lane said, that’s unusual.

The hospital is now looking at expanding its PET offering — as well as perhaps mobile CT and MR — to its urgent care site 30 miles south in Calexico, California.