by Lisa Chamoff, Contributing Reporter
As more and more procedures become less invasive and shift to outpatient surgical centers and hybrid operating rooms, the C-arm market is following, with mobile systems designed with small spaces and flexibility in mind.

At the same time, OEMs and also table manufacturers are continuing to keep an eye on reducing dose, while making procedures more accessible to a wide variety of patients.

Here’s our guide to the latest equipment in the space.

Canon Medical
In the third quarter of 2018, Canon Medical launched the Alphenix line of C-arms and tables, with six different configurations, including three single-plane, one dual-plane, one biplane and a 4D CT system.

The floor-mounted Alphenix Core + and Alphenix Biplane are capable of HD imaging, which Casey Waldo, director of the vascular business unit at Canon Medical described as a “flat detector within a flat detector.”

“The second flat detector gives optimal magnification within a small field of view,” Waldo said. “It improves spatial resolution by two-and-a-half times and leads to enhanced visualization of structures; this helps clinicians with treatment decisions, translating into precise live visualization of devices.”

Waldo said there is no increase in dose.

“The utility of HD Imaging proves to be advantageous if we can show there is no dose penalty,” Waldo said.

The company’s Alphenix 4D CT configuration fits into the fast-growing interventional oncology market for minimally-invasive tumor treatment, allowing physicians to see changes in the tumor and adjust treatment, then using the CT to evaluate the results. 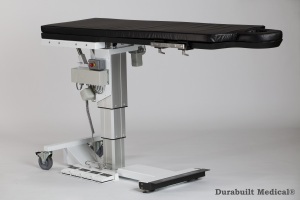 Durabuilt DM HLTE Platinum Standard
It is currently being used for a variety of conditions, including interventional oncology, at West Virginia University Medical Center.

“This is a tool and technique that really allows physicians better overall guidance and reassurance that they have treated effectively,” Waldo said.

Durabuilt Medical Tables
Last October, Durabuilt increased the weight capacity of its Platinum table to 650 pounds and added a wireless hand control labeled with images instead of words.

The table can also go lower to the ground, with the lowest setting allowing the table to be lowered 21 inches, depending on the motors and accessories.

“We’re constantly evolving and trying to stand up to the C-arm technology,” Asbille said. 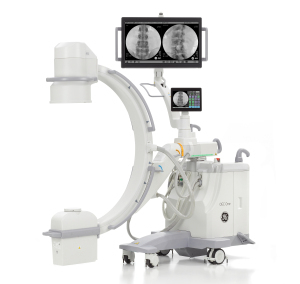 GE OEC One
GE Healthcare
For the past three years, GE Healthcare has been replicating its entire portfolio of image intensifiers and transitioning to flat panel systems.

Last year, the company added what it calls motorized drive configurations that allow surgeons to control the motion of the C-arms themselves.

“Some C-arms are operated by clinicians who do not have a radiology technician in the room at the same time,” said Dan Strauch, chief marketing officer of GE Healthcare’s surgery business.

Also last year, the company released the OEC One, a budget-minded image intensifier system that has the mainframe of the system and workstation in one. The device is targeted toward small surgery centers.

“Surgery centers with constraints on available room size are looking for something that's little more maneuverable,” Strauch said. “We were looking to create a system that would support their workflow.”

While the initial introduction was for orthopedic use only, the OEC One received FDA clearance for vascular capabilities before last year’s RSNA.

On the OEC Elite CFD platform, last year GE added new applications, such as a Digital Pen, which allows surgeons to write on the screen digitally – to, for example, measure stenosis or mark positioning to place a stent – for surgical planning purposes. It also introduced a General HD profile, which allows for premade adjustments, such as more edge definition, for the surgeon.

“Instead of making all of those adjustments for the surgeon, it gets the surgeon 90 percent of the way there,” Strauch said. “It’s a quicker way to make the vast majority of adjustments that the surgeon will need.”

The company also added Live Zoom that allows the image to be zoomed four times digitally without taking a second shot, or it can take a shot already zoomed in.

“The patient is able to remain on one OR surface and can be transferred to CT or MR,” said Kevin Shanahan, head of sales for hybrid OR, orthopedic and general surgical tables for Getinge. “They’re able to remain on that table for all three imaging modalities.” 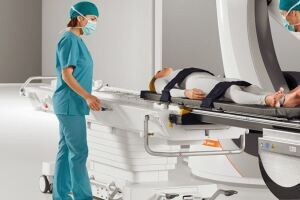 The PILOT Patient Transfer System from Getinge
Shanahan said this follows the trend of neurosurgical and spine procedures moving to a hybrid OR setting with more use of imaging during the procedures.

“You’re saving potential readmissions and re-surgeries and imaging procedures that would have to be completed at a later date,” Shanahan said.

Previously, Siemens had a shorter tabletop that could be used only for upper body imaging, or the patient would have to be put onto a different stretcher and lifted into the machine, Shanahan said.

Also in February, Getinge released the Yuno II for orthopedic procedures, which provides easier access to the C-arm. 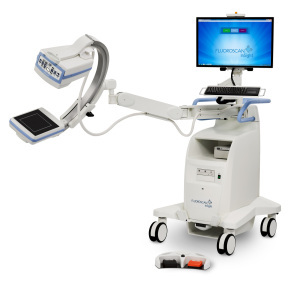 Hologic Fluoroscan InSight 2
Hologic
In January of 2018, Hologic released software and hardware enhancements to its Fluoroscan InSight FD mini C-arm, which is used for imaging of the extremities, focusing on image clarity, positioning and maneuverability.

The new software includes a low-dose mode that the company says enables the user to reduce the dose up to 50 percent, compared to auto mode. The company claims this new mode produces up to 34 percent less dose, compared to its competitors’ low dose mode.

High-resolution mode enables the user to get a high-resolution image that “enables them to use all the pixels in the detector to get an image with a very high detail,” said Raj Sivakumar, associate product director for Hologic, who noted the detector on the Fluoroscan InSight FD has 75-micron pixel spacing.

The company also made the MegaView feature on the Fluoroscan InSight FD available in the review mode as well as the perform mode, while both taking and reviewing the images. This feature provides the user with an enlarged image for easy viewing in the operating room, Sivakumar said.

The company added a pinch to zoom feature, similar to a smartphone, and added more color coding to the user interface.

An autosave feature and a way to add patient information manually was also added, and there is also a place to store the C-arm’s wireless foot pedal. 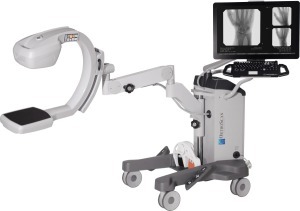 Orthoscan FD Pulse with 24in Monitor
Orthoscan
Over the past year, Orthoscan has made some updates to its FD Pulse, FD-OR and Mobile DI mini C-arms, adding a 24-inch touchscreen monitor, with a software experience similar to smartphones, to all three products, replacing a 20-inch non-touchscreen monitor.

The company is also launching a new family of mini C-arms that were pending FDA 510(k) clearance as of press time.

Called the TAU family, the new product line is “redefining the surgical possibilities of the mini C-arms, while keeping dose at record lows,” said Travis Prikryl, vice president of surgical sales at Orthoscan.

The TAU line will include the first mini with a specific indication for pediatric use, with 60 to 84 percent dose reduction over the FD Pulse.

“The way we’re achieving this is through specialized filtration including improved dose management algorithms,” Prikryl said. “It will offer an increase in image quality along with dose reduction. … Obviously, dose reduction is a major initiative in radiology nowadays for customers and patients alike. Focusing on the pediatric market allows us to drive our dose to the lowest possible.”

A larger detector will provide a greater than 15-centimeter by 15-centimeter viewing area to allow for viewing larger areas of extremities, such as the shoulder or higher up on the leg, Prikryl said.

The product will also offer an enhanced cybersecurity package to secure the equipment from current and future cyber threats, Prikryl said.

The new line is targeted toward vascular and orthopedic surgeons and can be wheeled from one OR to another, and has a “harmonized user interface,” said Ronald Tabaksblat, business leader for image guided therapy systems at Philips.

“Very often people have a fleet of these systems, Tabaksblat said. “They all have the same user interface. That’s an advantage in the OR so not everyone has a specific learning curve.” 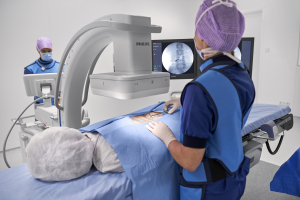 “As we go forward, we will be introducing the very advanced clinical applications that we developed for Azurion to this platform,” Tabaksblat said. 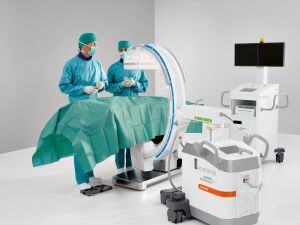 Lisa Reid, director of product marketing for mobile surgery at Siemens Healthineers said the 3D images can help surgeon see, in different planes, things such as pedicle screw placement in the spine and implants.

“It helps reduce the cost of the entire surgical procedure because it may reduce the need for second surgeries and CT to check the placement,” Reid said. “It’s very versatile in that it does not just provide 3D CT-like imaging, but 2D as well.”

The C-arm can link to surgical navigation systems.

“With minimally-invasive procedures increasing, it’s likely that the need for navigation and 3D imagining will increase,” Reid said.

While there have been no installations of the Cios Spin yet in the U.S., customers in Europe have been using the 3D capabilities for spine, facial and hip surgeries, Reid said.

In October of last year, the company released a version of its Cios Select with an amorphous silicon flat panel detector and a touch screen user interface. This budget-minded system targets pain management clinics and general surgeries, following the trend toward more outpatient procedures.

There is also full control of C-arm at the C-arm, instead of just via a cart.

“With all of our systems you can control all settings at the C-arm so you don’t have to go back and forth to the monitor cart,” Reid said. 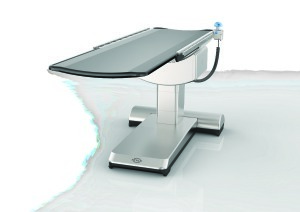 The imagiQ2 from STILLE
STILLE
STILLE continues to make updates to its mobile imaging tables based on the trends of the market, including 3D imaging. The company has added several accessories that promote an increased imaging area.

The imagiQ2 tabletop has a .4-millimeter aluminum equivalency that the company says has the lowest attenuation on the market, to help reduce dose and improve image clarity, and comes with a curved design to minimize artifacts when imaging.

The company also recently increased the weight capacity of the table from 500 to 661 pounds and improved the performance of the battery, which can last up to five days, said Susan Neese, vice president of sales at STILLE.

STILLE also made enhancements to its Medstone table series, including a lower elevation to 25 inches from 28 inches to allow for easier access, particularly for patients with disabilities. 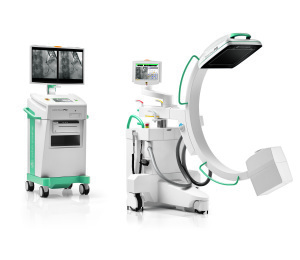 Ziehm Vision FD from Ziehm Imaging
Ziehm Imaging
At last year’s RSNA, Ziehm Imaging showcased its new Articulating Monitor Arm, which is mounted to the monitor cart and can be moved in different directions based on the surgeon’s preferred viewing angle.

At this year’s ECR show in Vienna, the company launched its Ziehm Vision FD with a 31-centimeter-by-31-centimeter panel.

The larger detector creates a larger field of view for orthopedic and vascular surgeries, Ringholz said.

The company also showcased how its Ziehm Vision RFD 3D can integrate with major surgical navigation systems, from companies including Brainlab and Stryker, as well as robotic guidance systems from companies such as Globus Medical.